With rumors that an election might be called soon, here’s a quick recap of where our West Malaysian political parties stand. 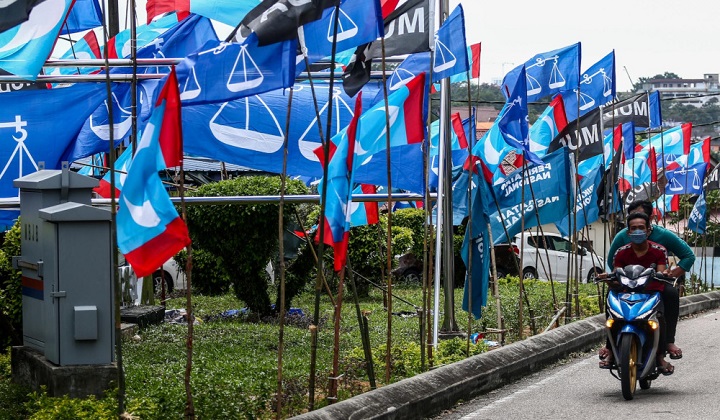 A flag war between the parties. (Pic Credit: Hari Anggara/MalayMail)

Backbenchers in UMNO are all but baying for a snap General Election as the Malay-based party had a string of by-election wins.

However, another source of motivation is of course half of its effective leadership recently landed in jail with perhaps the other half soon to follow.

To get them out of this jam, UMNO needs to take over now or the party will have to face the dubious task of changing, maybe even for the better (gasp!).

Of course, this is difficult with the structure of UMNO as it is; a tree so hard to climb everyone with their feet off the ground screams at the slightest shake.

All the more reason why we can’t give the government back to them. It will undo the sacrifices we the people, the rakyat, made in GE14, the chance we took, the ground we gained.

If we do, we’ll just go back to a Malaysia where blatant corruption is accepted and one race lives privileged and gets defensive at the slightest hint of equality.

Speaking of which, PN and their ilk – mainly PAS but still including UMNO – barely got us through the Covid pandemic.

If anything, they were the worst of us.

They set rules and broke them themselves, then forgave themselves and threw a fit when we didn’t like that.

They whined and bitched and moaned and preened about doing a job they stole in nothing less than a political coup.

And then the largest Cabinet in the history of the country just sat there sucking up funds and stinking in the mud like a fat pig.

That is except of course for Health Minister Khairy Jamaluddin who did comparatively better than his immediate predecessor, a bar so low it would need to be excavated just so KJ could trip over it.

Even if PN did a good job these past 2 years we can’t reward them or we risk setting a precedent of validating stolen governments, what more rewarding how they actually did? i.e. Not good.

Pejuang and MUDA? Vote for them if you want. It may not matter. They’re mostly still too few and too new to take over, or too old to hinge a future on.

They don’t look like a group that will last as a government to the next GE and need a bit more time in the wild.

Does that leave us with PH? Without a doubt the most disappointing group of the lot?

Well, PKR’s Datuk Seri Anwar Ibrahim has been trying to rewrite history, saying he turned down a chance to be Prime Minister because it came on the condition that he help Datuk Seri Najib Razak escape the law.

However, it appears as though it was the Agong who rejected Anwar’s “strong and convincing majority” as Malaysia’s ‘Always The Bridesmaid, Never The Bride‘ refused to reveal the source of his support.

This unscrupulous single-mindedness was also part of why PH lost what we sacrificed for and entrusted to them after just 2 years in government.

Despite what they will have you believe, PKR and Bersatu share equal blame in that regard because while Bersatu was the ringleader of the betrayal, PKR had at least one public chance to fix the issue and they didn’t.

And they’re only now starting to kind of change with the return of Rafizi Ramli, but they’re still saddled with the same PM candidate they had 25 years ago.

However, the last guy they fielded and won was in his 90s, so it makes a 75-year-old look like an okay PM candidate, even though it’s not.

Meanwhile, DAP and Amanah have stood idly by watching this and going through the motions like back-seat passengers instead of partners.

So who should you vote for?

It honestly hurts me to say but, short of voting for individual candidates, we should vote PH.

UMNO and PN have done too many bad things and need to be punished. We need to make another sacrificial play to force them to change.

While Anwar will be part of that package, a mostly-refreshed leadership in PKR might be able to set him straight.

Additionally, PH has mostly just done stupid things but maybe they’ve learned a bit of a lesson since losing the government or might while in government again.

Even if they don’t, hopefully by 2029 UMNO would have learned its own lesson or something new might come about.

Maybe MUDA would have grown up by then.