The Barisan Nasional chief said that the real reason behind Pakatan Harapan’s rejection of the general election to be held this year is because it realised that the majority of the Malays are no longer supporting them. 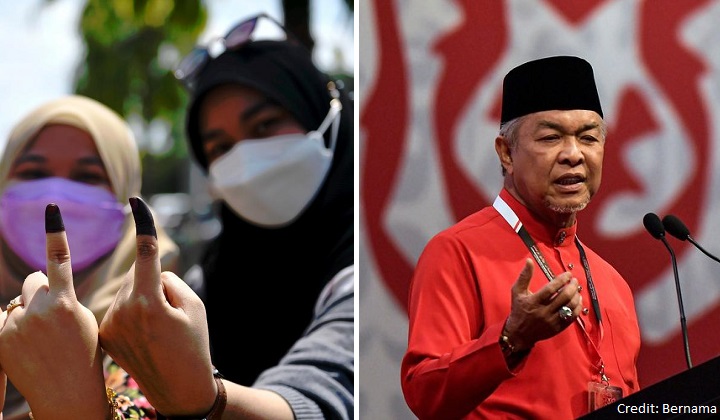 Waning Malay support towards the coalition is the real reason behind Pakatan Harapan’s (PH) objection to the general election to be held this year, says UMNO president Datuk Seri Ahmad Zahid Hamidi.

In a Facebook posting today, Zahid said that the opposition camp is hiding behind the narrative of floods and inflation to delay the general election.

“The opposition’s real concern is that the Malay voters who represent the country’s largest population are less interested in supporting the coalition when BN is hammering on the election drum,” wrote Zahid.

The Bagan Datuk MP said that PH has no other choice than to deflect the call for an early election to buy some time for the pact to regain the support from the Malays.

Zahid also pointed to a recent report by MalaysiaNow that stated that Malay support for the opposition coalition is at an all-time low.

“In fact, it is said that the survey found that PH will not get more than 15% of the Malay vote in the GE15 if the general election were to be held in the near future,” he said, adding that the Malay votes are likely to return back to UMNO.

The former deputy prime minister also hits out at PH for failing to offer any solutions for flood relief or any ideas to combat inflation, saying that the Opposition pact is more interested in crafting plans to win the next general election rather than finding the solution to the people’s plights.

“This shows the true attitude of the Opposition. What’s strange is that there are also UMNO allies that are still deceived by the Opposition’s propaganda.

“Or perhaps they have an ulterior motive for wanting to delay the general election before the monsoon season begins,” he said.

UMNO’s call for the general election to be held during the monsoon season was criticised and rejected by several parties, including its ‘frenemy’ PAS.