From Langkawi to Semporna, there are tons of exotic food that we might have not tried before. 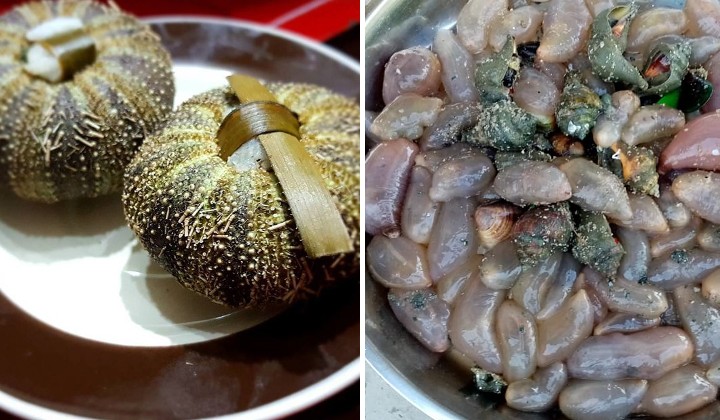 If there’s one thing you need to know about Malaysia, it’s in terms of our FOOD. Malaysia is, truly Asia.

As our country is a cultural melting pot of various ethnicities, they are tons of gastronomic delights and some that we haven’t even explored yet.

But fret not, here, we listed some of Malaysia’s peculiar but sought after food that you might not even hear of.

This is not for the faint-hearted. Popular in Mamak stalls, this herbal lightly-spiced soup is made with bulls’ penises and served with slices of Bengali bread.

The taste is said to be very chewy, like cartilage and this soup is known to have aphrodisiac properties.

Fried grasshoppers are actually a popular snack in Kelantan. Often described as tasting similar to crunchy shrimps, these six-legged insects are packed with proteins, vitamins and antioxidants.

The process involves blanching the grasshoppers in boiling hot water first then frying them with various seasonings.

For some people, this is not a weird delicacy because it’s so normalized here in Malaysia. You can see them in various cookings: steamed, fried, in curries, kerabu and many more. They taste like regular chicken bits but less meaty, more bone-ish.

Some people may have the perspective of chicken feet being dirty and unhealthy, but one fact suggests otherwise. Thanks to their high collagen content, these chewy feet will help relieve joint pain, aid in skin health and prevent bone loss.

Sago Worms or Butod are some of the most well-known delicacies in Sabah and Sarawak. These high-protein and high-fat grubs are enjoyed by the indigenous communities there for centuries.

They are said to taste creamy when eaten raw and like bacon or meat when cooked. Raw sago worms are also said to taste like coconut milk but with a bit of sweetness. These grubs are very clean unlike other maggots because they only feed on and live inside a sago pith.

As exotic as this is, this is actually quite normal for some locals in Malaysia. They are often cooked in Masak Lemak Cili Padi (Spicy green coconut curry) or Gulai (curry).

The texture is said to taste like pureed fish eggs and no, it doesn’t turn you into a zombie. Preparing the brain is quite tedious as you need to soak them in water first. Then, all of the veins and membrane needs to be thoroughly removed to eliminate the ‘fishy’ or raw taste. After that, you can cook them in whatever dish you like.

If you’re a local in Langkawi, maybe this is a mundane dish to you. But for the rest of us, surely we’ve never seen this live in front of our eyes, right? Beronok is a species of sea cucumber that can be found in the muddy areas of a beach.

It’s often cleaned, cut into slices and mixed with coconut sambal, kerisik, chillies, mangoes and other herbs to make Kerabu Beronok. Beronok cannot be cooked under heat as they will likely melt into saltwater. They are said to taste salty and chewy when eaten raw.

Nasi Tehe-Tehe is a special delicacy for the Bajau Laut or sea gipsy community in Semporna, Sabah. The special thing about this is that the rice is infused with the taste of sea urchin which can be described to be a bit similar to fish eggs.

To prepare this dish, the sea urchins need to be boiled first to remove the hard spikes and then the internal organs are discarded. When the shell is cleaned together with some of the meat, properly seasoned rice is added and the shell is closed off with some pandan leaves. Then they are boiled until they’re done.

All in all, these are some of the unique delicacies that you can find in Malaysia.

Have you tried any of these before?