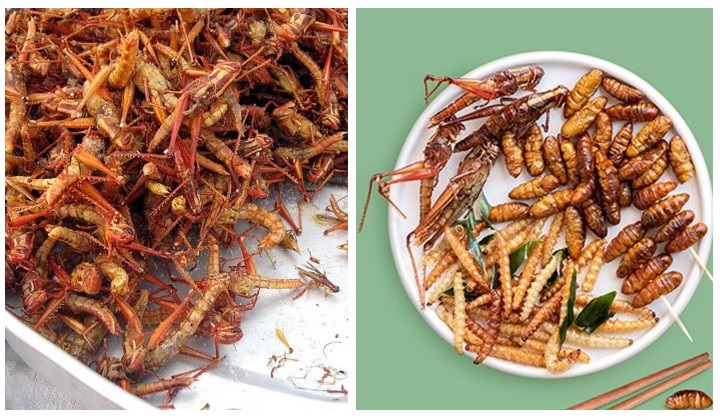 Grasshoppers have been described as tasting similar to shrimp, and who doesn’t love a crispy Ebi tempura dipped in sweet-salty dipping sauce?

If the thought of consuming grasshoppers repulses you, you’re not alone. But did you know they are actually a sought after snack not only in our neighbouring countries like Thailand but there are several foodies here who are jumping at the chance to get their fingers on these six-legged bugs?

That’s where sisters Emi Zuhaida and Emi Zuhaika Husain come in. They’ve been selling deep-fried grasshoppers to customers in Kelantan, Johor, Selangor, Negeri Sembilan and Pahang and their customers are loving it.

“Delicious but hard to find”

Emi Zuhaida has been told by foodies that deep-fried grasshoppers are delicious but hard to find. However, the sisters have been lucky to have a producer of the exotic snack in Pasir Puteh that sends them 15-20, 100gm jars every couple of days.

Each jar sells for RM16, which sounds like a pretty decent side hustle for the sisters. In fact, the high demand allows for them to use the Cash-On-Delivery (COD) method.

It’s all in the preparation

Spiced grasshoppers are a particular favourite for the sisters because of the seasoning, described as “sweet-salty and rich coconut milk taste, as well as crunch.”

They say crunchy turmeric or spiced insects are a favourite for Kelantan folk with some customers who buy them as presents for their parents and family members because it used to be a favourite of theirs, while others just want to give it a try.

Despite being classified as an insect, which might make some people’s skin crawl, Grasshoppers provide disease-fighting antioxidants.

And according to the National Autonomous University of Mexico, grasshoppers are also very beneficial because of their extremely high vitamin A, B, C and protein content. They can contain more protein than both fish and milk.

These jumping green critters are also known to have a high amount of fibre, and provide very high doses of magnesium, calcium, and zinc – nutrients we often lack in our normal diets.

After reading about all the nutritional value, grasshoppers are beginning to sound a lot like a multivitamin in the form of a crunchy snack, doesn’t it?

Not just grasshoppers, but other bugs too

But grasshoppers aren’t the only bugs you can eat that are healthy for you. Crickets, mealworms, termites, and black soldier fly larvae come highly recommended by the health and wellness website Everyday Health and are collectively good sources of protein and healthy unsaturated fat.

Although I’ve never tasted grasshoppers, I can attest that eating fried insects isn’t as nasty as it sounds. It’s all about mentally preparing yourself and biting the bullet when the opportunity arises to bite the bug.