It’s a good effort for a prosperous and pepper-ity Chinese New Year. 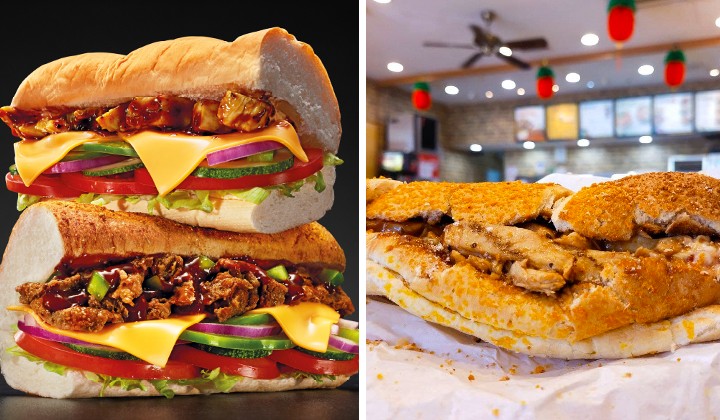 Before this, their Black Pepper Chicken sandwich was said to be a crowd-pleaser and so they brought it back this year with a new protein flavour, Black Pepper Beef.

With descriptions such as succulent shaved steak and chicken strips coated with a glaze of tantalizing black pepper sauce, these sandwiches are said to provide the right amount of peppery heat.

Black Pepper is a flavour that the community loves and pairing it off with a brand new Malaysian-inspired Pandan cookie, it is going to be an exciting and delicious festive season with Subway.

Hooked by the amusing ad and my love for pandan flavoured stuff, I decided to give the new menu a try.

I went and got a Parmesan Oregano bread for my Black Pepper Beef sandwich and the Garlic one for the Black Pepper Chicken. Not a big fan of heavy veggies, I just opted for lettuce and the four usual sauces which were chilli, mayonnaise, bbq and thousand island.

At first, it doesn’t look much when they were preparing the sandwich (maybe because I was hungry too). But when I opened it, I really think the amount of chicken strips is quite generous. Their soft chicken breast strips are really juicy and it pairs well with the black pepper sauce. No wonder it’s a people pleaser.

The beef alternative, although new, was not quite of a ‘show-stopper’ for me. If you guys like wet shredded beef with all the sauces, veggies and hugged with soft bread, then this is perfect for you.

For the new flavoured cookie, the first bite was a ‘Meh…’ kinda moment for me. But after a few more bites, it eventually grew on me.

Like most of their cookies being crunchy on the edges and chewy on the middle, this pandan cookie is actually super soft and chewy at the same time. Eating this reminded me of the Bahulu Pandan Kuih, the soft and fluffy pandan flavoured mini sponge cake. Adding to its chewiness were the coconut flakes, which was quite fun to taste and chew on.

You can customize the sandwich however you want but they recommended lettuce, cucumber, red onions and sliced cheddar cheese for a good pairing for the black pepper series.

I would say that the sauce has just the right amount of peppery heat. If you want a stronger taste of black pepper, you might need to limit the other kinds of sauces that are usually offered at the sandwich station so that the black pepper sauce truly has a chance to shine.

Overall, I think that the new Black Pepper Sandwiches and Pandan Cookie are not bad, and could be a nice change if you want to switch up your usual sub order. Personally, I prefer the chicken option to the beef.

This limited edition deal starts from 19 January to 29 March 2022 and is definitely worth a try for those black pepper lovers or for those who love to try new things.

Additionally, Subway is pairing with Coca-cola and currently having a CNY contest from 19th January to 15th February 2022. Stand a chance to win prizes with a purchase of their Black Pepper combo. Check out their contest page here.

Subway’s Introducing Their New Seafood Patty: Should You Try It? [Review]