Despite the struggles of 2020, these Malaysians have managed to shine and inspire us all 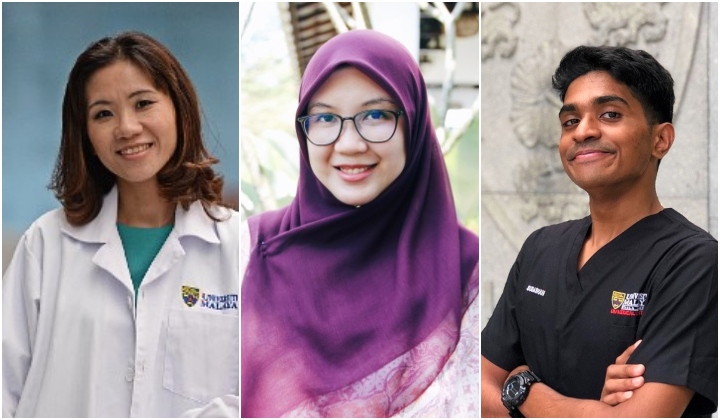 While 2020 may be remembered by most as one of the worst years in existence, there were a few inspiring Malaysians who did our country proud with their incredible achievements.

So let’s end the year celebrating these Malaysians’ hard work and determination!

She was awarded with her wings in October 2020, which marked her graduation to being a ‘combat ready’ pilot after nearly 6 years of training.

Malaysians were besides themselves with joy in July when Dr Masliza Mahmod was appointed as an Associate Professor at the prestigious Oxford University, UK.

Not only that, the esteemed 48-year-old cardiologist expert from Johor is also a member of London’s Royal College of Physicians (MRCP) and the Steering Committee of the British Society of Cardiovascular Magnetic Resonance (BSCMR) Heart Failure Research Task Force.

Dr Cheah was made an Associate Professor in Biotechnics and Engineering in 2016 and is currently based in Bangkok, Thailand where she heads the Department of Bioethics and Engagement at the Mahidol Oxford Tropical Medicine Research Unit (MORU) in Thailand.

Her work focuses on conducting research and working with vulnerable members of society like women, children, migrants as well as the disadvantaged and disenfranchised on ethical related issues.

Malaysian engineer Kevin Lim Chin Seong has made the country proud by coming up with an excellent space toilet that has earned an honourable mention from the National Aeronautics and Space Administration (NASA) in the United States.

The Lunar Loo Challenge, which took off on 25 June this year, garnered more than 2,000 submissions across the globe, including Kevin’s Fully Self-Contained Lunar Toilet. The Malaysian engineer took two months to design a next-generation device that is smaller, more efficient, and capable of working in both microgravity and lunar gravity.

Though he didn’t win the main prize, Kevin is quite pleased with his achievement as his goal in participating in the challenge was to share his experiences as an engineer and to draw global attention to Malaysia.

Meet Samuel Isaiah, a Malaysian teacher known for his incredible work in educating Orang Asli children, and a top 10 finalist for the prestigious Global Teacher Prize which awards US$1 million to a teacher who has made an outstanding contribution to the profession.

The 33-year-old teacher successfully transformed the lives of his Orang Asli students at Sekolah Kebangsaan Runchang, Pahang. With the use of creative teaching techniques – including using music and outdoor activities – Cikgu Sam’s students passing rate for English rose from a meagre 30% to an impressive average of 80%!

Wildlife researcher Dr Ravinder Kaur was awarded the 2020 Marsh Awards in October for her outstanding contributions to sustainable biodiversity at the local level.

Since 2013, Dr Ravinder and her team at the Hutan-Kinabatangan Orangutan Conservation Project in the Kinabatangan Wildlife Sanctuary in Borneo had been installing artificial nest boxes to provide vital nesting sites for Kinabatangan hornbills. In 2017, the team recorded the first-ever successful fledgling of a wild rhinoceros hornbill chick from an artificial nest box.

With the award, Dr Ravinder won the prize money of GBP4,000 (around RM21,400) which will be used to fund the project as she pushes on in the conservation of our native hornbill species.

Malaysian author Hanna Alkaf has had quite an incredible year as two of her novels have received international acclaim.

The 35-year-old’s debut novel set during the May 13th racial riots, The Weight Of Our Sky, won the US-based Freeman Book Awards in the Young Adult/High School Literature category, and and has even been reproduced as a webcomic.

Hanna’s second novel, The Girl and the Ghost, subsequently was listed as a finalist for the American Kirkus Prize under the Young Reader’s Literature category. She is also the only non-American author to have made it as a finalist in this category!

The Girl and the Ghost is a delightfully local tale that features Malaysian folklore, namely a ghostly grasshopper pelesit and his owner, and the extraordinary power of friendship between them.

You’ve probably heard of Nor ‘Phoenix’ Diana, the petite Malaysian who made headlines across the globe as the world’s first hijabi pro wrestler in 2019. But the feisty lass continues to make her mark, as she was listed on the Forbes “30 under 30 Asia” 2020 list and graced the cover of Forbes Asia’s April edition as well!

Honoured in the list’s Entertainment & Sports section, Nor Diana is lauded for breaking down barriers as she defeated five men to become the first female champion of the Malaysia Pro Wrestling (MyPW) Wrestlecon championship, which has been running for 6 years.

She then quit her job as a clinical assistant last November to train in London with the UK’s Pro Wrestling: EVE.

A Malaysian virologist from University Malaya (UM), Dr Chan Yoke Fun, was declared winner of the 2020 ASEAN-US Science Prize for Women – an award that honors Southeast Asian’s female scientific minds for their academic and professional achievements.

The Associate Professor and the Head of the Department of Medical Microbiology at UM’s Faculty of Medicine is said to have been credited in over 80 academic journals and international publications throughout more than 20 years of her career.

Dr Chan’s research centers around infectious diseases, specifically, the Enterovirus A71 or EV-A71 for short – a commonly preventable virus that causes hand-foot-and-mouth disease (HFMD) as well as severe neurological disease or brain damage.

Humbled by her accomplishments, Dr. Chan hopes to empower women to champion their passion, perseverance, and positive thinking in achieving greater heights. She is currently focusing on developing vaccines for the virus as well as educating people about the disease.

Erica Eng – winner of the prestigious Eisner Awards for her webcomic

The Will Eisner Comic Industry Award is akin to the Academy Awards of the comic industry. The votes for the awards are only open to comic industry professionals, and Erica is the youngest Malaysian to have been nominated and won.

22-year-old Erica Eng’s comic Fried Rice is an autobiographical fiction set in Malaysia. The art is familiar and nostalgic, giving local and international readers a slice of Malaysian life with every update. She cites Lat as a comic inspiration, and she hopes to depict a modern Malaysian life for international and local audiences.

Brelveenraj Kaur Rajwant Singh made Malaysia proud when she was selected to represent the country as the National Point of Contact (NPoC) to the United Nations-backed Space Generation Advisory Council (SGAC).

The 25-year-old, who was born in Kuantan, is one of the 13 young volunteers appointed to the council in May 2020, which is in support of the United Nations Programme on Space Applications.

Brel is currently working as a satellite controller with MEASAT while pursuing her masters in Aerospace Engineering (GNSS in Aviation).

Subashan Vadibeler, a 24-year-old final year medical student at Universiti Malaya (UM) did the nation proud when he was awarded the prestigious Rhodes Scholarship to study at the University of Oxford in the UK!

The Ipoh lad hopes to one day eradicate dengue, a dream inspired by his experience in medical school at UM, where he saw many patients who were suffering from the mosquito-borne disease.