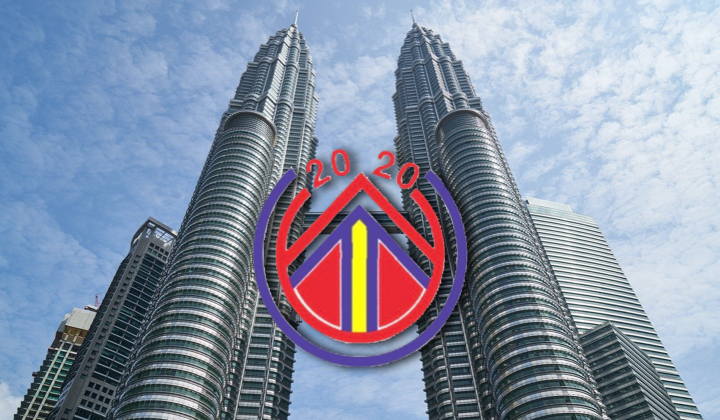 Since its inception in 1991, Wawasan 2020 aka Vision 2020 was both a catchy song and the dream of a utopic Malaysia “a fully developed nation” that is prosperous, harmonious and with flying cars zooming around skyscrapers.

Well, time’s up! 2020 is knocking on the door and asking for a vision test.

While Tun Dr Mahathir Mohamad has already lamented the failure of Wawasan 2020 (despite the flying car), an Ipsos research finds that 40% of Malaysians believe that we’ve already achieved it.

Dr Mahathir first announced his vision back in 1991, with the running theme of â€œa fully developed country by the year 2020.

By the year 2020, Malaysia can be a united nation, with a confident Malaysian society, infused by strong moral and ethical values, living in a society that is democratic, liberal and tolerant, caring, economically just and equitable, progressive and prosperous, and in full possession of an economy that is competitive, dynamic, robust and resilient.

To achieve this grand vision of a utopic Malaysia, the government outlined 9 challenges that must be overcome:

Can we actually measure Wawasan 2020 achievements?

There’s no objective way to tell if we’ve overcome these challenges or even achieved Wawasan 2020. There isn’t a specific target, and 7 out of 9 challenges can’t be measured.

The only measurable outcome is the GDP, which Dr Mahathir envisioned to be 8 times larger than 1990 with an annual growth rate of 7%.

VERDICT: HAS TROUBLE CATCHING UP

How about looking at the developed nation status?

According to the United Nations, Malaysia is still a developing economy.

But, let’s look into some of the 9 challenges put forward in Wawasan 2020 and see how we measure up today.

In the age of social media, we constantly face a barrage of incidents that incite racial and religious anger. The good news is Malaysians, for the most part, still, seek unity.

On the flip side, a 2019 study by Ipsos Malaysia found that 67% of Malaysians are concerned about national unity and safety, especially on the possibility of violent conflicts involving ethnic or minority groups. This fear increased by 12% from the previous year.

Meanwhile, Sultan Nazrin Shah of Perak was quoted by The Star lamenting that a firmly united nation is still elusive despite 62 years of independence, expressing concern about slogans and rhetoric in the name of race and religion with extremist tones.

Progress is seen in the form of a brand-new ruling government after 61 years of independence, which showed a maturing democracy.

This is further marked by lowering the voting age from 21 years old to 18 years old, thereby giving more Malaysians a voice in democracy.

A fully moral and ethical society

According to Dr Kua Kia Soong, who serves as an adviser to SUARAM (a local human rights NGO), human rights in Malaysia still fails to be held in good standards. He told The Star that this is due to the lack of political will to reform decades of institutionalised politics of racism and racial discrimination.

However, based on the United Nation’s list of 30 fundamental human rights, Malaysia is slacking in only 4, which includes child marriages and citizenship laws biased against women.

A matured, liberal and tolerant society

Based on the current political climate, it seems that there is increasing conservatism in Malaysia.

The Jakarta Post notes that religion is fast becoming a main source of dispute in Malaysia in 2014. Speaking to now Election Commission chairman, Azhar Harun (aka Art Harun), he expressed concern on how everything, from TV shows to festive celebrations, has become wrapped in religious fervour.

Malaysia’s social tolerance is also shown to have dropped drastically in 2019 in The Prosperity Index 2019 by London-based Legatum Institute.

Fair and equitable distribution of the wealth of the nation.

The initial goal of Wawasan 2020 was to narrow the wealth gap between ethnic income groups, which the 2005 National Mission government report surmised as showing slight improvement.

While Malaysia’s middle class has expanded since 1991, a Khazanah Research Institute (KRI) study cited in The Star found that the income gap between the rich, middle class and poor in Malaysia has widened since 2008 – almost double compared to 20 years ago.

The Malaysian Reserve also highlighted that only 0.2% of Malaysian adults have wealth over USD1 million (~RM4.13 million) despite the national wealth’s 14% year-on-year growth to a total of USD682 billion (~RM2.8 trillion) in 2019.

Despite this, Malaysia’s Gini coefficient, which measures income distribution, has been improving every year.

Another good news is the implementation of a minimum wage in 2009 and the subsequent increase to RM1,200 (for urban centres) in 2020.

For a brief interlude in 2017, the next wawasan for Malaysia was former prime minister Najib Razak’s National Transformation 2050 (TN50). The aim was for Malaysia to be a nation of calibre, with a new mindset by 2050.

But that plan died along with Barisan National’s loss in the 2018 general election.

Following that, the new Pakatan Harapan government under Dr Mahathir made mentions on extending the Wawasan 2020 deadline to 2025. But that idea was ditched and in October 2019, the Shared Prosperity Vision 2030 (SPV 2030) became the new wawasan.

This time, the goal is to provide a decent standard of living to all Malaysians, across income groups, ethnicities and regions, by 2030.

SPV 2030 is particularly keen on addressing wealth and income inequality instead of solely focusing on GDP growth. Plus, there are actually 10 measurable targets to measure the country’s growth in the next 10 years.

Only time will tell if 2030 will finally be Malaysia’s utopia, but having a clear measurable goal certainly helps.

What do you think of Malaysia’s progress in the last 30 years and what improvements do you hope for the future? Let us know on TRP’s Facebook, Twitter, and Instagram!