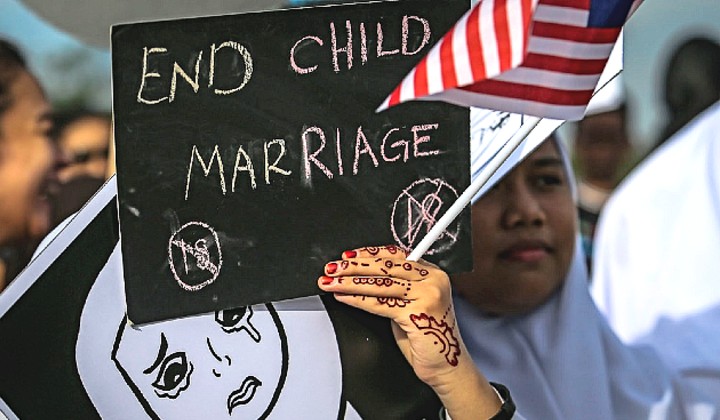 The fight to end child marriages hits another snag as 7 states rejected the federal government’s proposal to amend the minimum age limit for marriages.

Kedah, Kelantan, Negeri Sembilan, Pahang, Perlis, Sarawak and Terengganu, all opposed to amending existing laws that allow children below the age of 18 to be married.

So what’s the problem?

The problem is basically Malaysia’s complex legislative system and is a Federal vs. State jurisdiction issue.

Current Civil Law already places the minimum age for marriage at 18. But this only applies to non-Muslims.

The law also makes it compulsory for individuals under the age of 21 to seek permission from their parents to get married,

But, 17-year-old boys and 16-year-old girls can marry with a licence issued from their state’s Chief Minister.

However, a totally different rule applies to Muslims.

Under the Islamic Family Law, which falls under state jurisdiction, the minimum age for marriage is set at 18 for boys and 16 for girls.

But those under that legal age limit can marry with permission from the Shariah courts.

There also exists a customary law under the Native Courts Enactment which governs Malaysia’s native and indigenous communities.

Plus, based on Article 74 of the Federal Construction, a state has the authority to set rules within its borders or oppose laws made by the federal government.

This legal calamity makes it hard to set a universal minimum age limit for marriage. (Among other things…)

Is the problem really that bad?

Sarawak currently tops the charts for having the most registered child marriages.

What’s been done so far?

In October 2018, the Prime Minister ordered state government to raise the minimum legal age of marriage to 18, regardless of religious affiliations.

Since then the Women, Family and Community Development Ministry had been working on the National Strategic Plan to Overcome the Reason of Underage Marriage to cover both civil and Islamic marriage laws.

Starting August 2019, a special standard operating procedure is in effect to deal with applications for non-Muslim marriages under 18-years old. (But there isn’t much info on what the SOP actually does…)

Thus far, Selangor is the only state to have fully amended its laws to ban underage marriages, with Johor, Melaka, Perak, Penang and Sabah planning to follow suit.

The Federal Territory of Kuala Lumpur is also in the process of amending its laws on child marriages.

Is there any hope?

Based on Article 75 of the Federal Constitution, Federal Law shall prevail over any inconsistencies with State Laws.

This includes amendments to the state’s Islamic and Shariah Law.

With enough pressure from the Federal Government, as well as Malaysians, there might still be a way to end child marriages in the country.