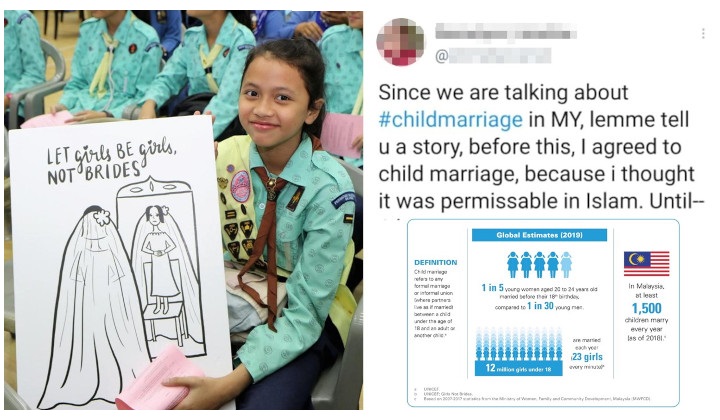 A tweet from Emmy (not her real name) sparked a discussion about child marriage recently, telling her story about how she used to agree with child marriage because she thought Islam allowed it until she started working as a social worker with at-risk children with the majority of her caseload on child marriages.

As a social worker for children at risk, Emmy’s day-to-day work was to assess and provide intervention for children in need of protection.

She’s seen girls as young as 9 or 10 years old forced into marriage with men 10 to 20 years their senior. Some were even trafficked into Malaysia as mail-order brides.

Robbed of a childhood

In the interviews she’s had with these child brides, Emmy learned that all they wanted to do was go to school, learn how to read and write but instead were robbed and deprived of an education.

Domestic violence among child brides was another issue. But that wasn’t the worse part.

Educate yourself in place of those deprived of an education

Emmy, who spoke to these children personally, felt as though she was “hit by a bus” upon hearing their stories.

She began doing her research about the issue of child marriage and found that Al Azhar, one of the world’s most prestigious centres of Islamic learning, issued a fatwa against child marriage.

In 2014, the Department of Islamic Development Malaysia (JAKIM) also declared child marriage an ‘unhealthy’ practice and stated health experts and psychologists confirming the existence of physical and mental health problems.

Child marriage is a REAL issue

In an advocacy brief by Unicef shared by Emmy, 15,000 cases of child marriage were recorded in Malaysia between 2007 and 2017, and occur in all communities across the country.

Seven main factors cause or enable child marriage in Malaysia which are often complexed and interlinked as seen here:

In the series of tweets by Emmy, she said some of us still think child marriage is “agenda barat” (western agenda) but urged us to look at our neighbours Indonesia.

As of 2019, Indonesia have banned marriage for your young girls after it was discovered that 1 in 5 girls marry before reaching adulthood.

As for some Malaysians who think banning child marriage isn’t plausible here, Emmy linked to an article by the Star that states Selangor has increased the permissible age for Muslims to marry from 16 to 18.

Furthering Unicef’s advocacy brief towards ending child marriage in Malaysia, the way forward is outlined in nine key areas as seen in this infographic:

Thanks to Emmy for bringing this issue to light!