It was a sea of red with an ‘island’ of blue on the roads of Ipoh. 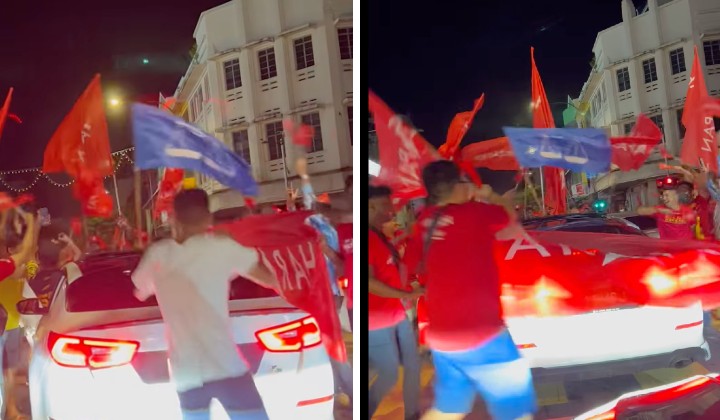 Hundreds of Pakatan Harapan (PH) supporters came out onto the streets in Ipoh on Saturday night.

Maszlee Malik. Nurul Izzah. Khairy Jamaluddin . They have lost and they are losing made me so sad and disappointed. They are our future leader. Our next leader. Sampai bila nk bagi corrupted leader to serve the people?

Dancing and celebrating with loud honks, they flooded onto the main roads in the city centre, leading to massive traffic jams.

As PH supporters danced euphorically at a busy junction, a car filled with Barisan Nasional (BN) supporters got stuck in a jam.

Not to be outshined, the BN supporters waved their flags from their cars as PH supporters danced and cheered around them.

It was a euphoric scene that could have been mistaken for a Christmas or New Year celebration.

Facebook user Rachel Lai posted the video, which has since gone viral with more than 12,000 shares.

Another Period Of Great Political Instability

Analysts predicted tumultuous weeks for Malaysia as there was no clear winner in GE15.

PAS is the biggest winner on the national stage with 44 seats, followed by DAP, which won 40 parliamentary seats, two less than in 2018.

PKR has won only 31 Parliamentary seats out of the 102 they contested.

It all depends on who Gabungan Parti Sarawak (GPS) and Gabungan Rakyat Sabah (GRS) will work with.

Both have 22 and six seats, respectively.

GPS, GRS and Warisan, please do the right thing and make scenario 5 happen so PH doesn't have to make deals with devils pic.twitter.com/H2Ik2sF4W4