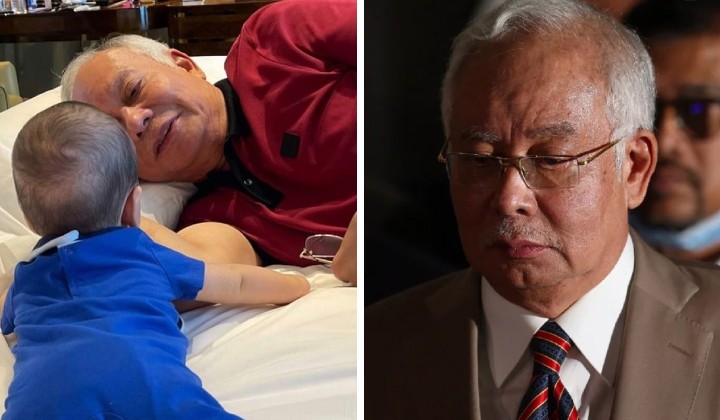 Former prime minister Datuk Seri Najib Razak continues to make his presence felt on social media despite being behind bars.

It’s not surprising, given that he has 4.6 million followers on his Facebook account and is touted as Malaysia’s social media king.

He left a note for his family members before heading to Kajang prison after being sentenced to 12 years imprisonment starting Tuesday (23 August).

But what saddened him was when that choice forced him to sacrifice time with his family.

The years passed, dedicated to the people, public service, and politics. A sacrifice I chose and I made. A happy journey with your presence but unfortunately I overlooked and could not always be there for you all. A very sad journey brightened by your presence but not reciprocated by Daddy.

On Tuesday (23 August), the Federal Court upheld their conviction and sentence of 12 years in prison and a fine of RM210 million against Najib.

He was found guilty of embezzling RM42 million in funds belonging to SRC International Sdn Bhd.

They concluded that Najib’s inconsistent defence did not raise reasonable doubt.

Straight From The Heart

The heart-wrenching note left on the table for family and grandchildren to see also commemorated Najib’s 46-year political career and public service that took up all of his time.

Former prime minister Datuk Seri Najib Razak on advantages and disadvantages of the world of politics and public service.

Through the note, Najib also said that the challenge with good results brought a smile to him.

Sometimes the expected results were not as good as desired but made him keep trying.

Looking back, it was a big sacrifice. The years and times there came and went just like that. From dawn to late at night, matters need attention. Even during meals, there are meetings, meeting guests, not with you all.

The prison sentence they served separated them as a family, but Najib seems to have calmed down with the situation.

Najib said he is surrendered to God and is waiting for justice and judgment in the court of the hereafter.

The Anger Continues To Burn

Some said he should not misuse the name of his mother and Islam to justify his actions.

Some are indignant that his Facebook posts continue to draw plenty of netizens’ reactions.

His supporters and fans expressed sympathy, wished him well and prayed for his early release with a pardon from the King.

Woke up, open facebook and saw 150k reaction on Najib FB post.
My supposed to be good day already ruined.

At the same time, critics said his Facebook is managed by professionals and that it is about time they find a new job.