Najib’s supporters came in droves to support him in his final SRC appeal. 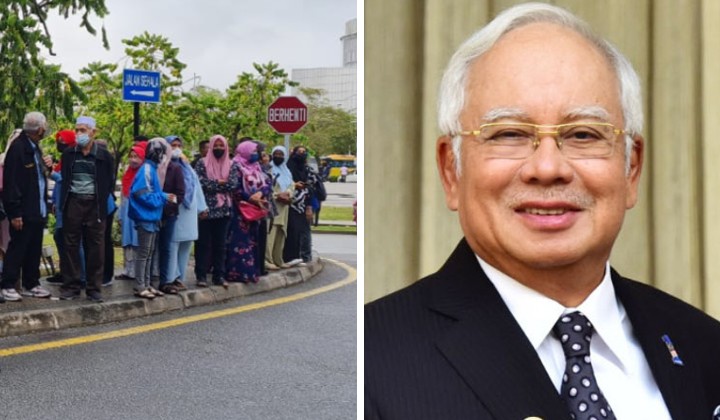 If you have friends who run away from you whenever you have a problem, then it’s time to understand they aren’t our real friends.

But in the case of embattled former prime minister Datuk Seri Najib Razak, his court trials prove that his friendship with the rakyat, especially the Pekan people, is the real deal.

His supporters came in droves, with 10 buses from his constituency of Pekan to the Palace of Justice in Putrajaya on Tuesday morning (23 Aug).

They were present in solidarity and sympathy for Najib, who was also the Menteri Besar of Pahang between 1982 and 1986.

MalaysiaGazette reported that most of them are UMNO members in the area.

According to one of the supporters known as Kak Ida, this is not the first time they attended a trial involving Najib.

However, today’s attendance was the most crowded.

She said those who came brought prayers that the country’s judicial system would give Najib due justice.

We have only one hope, let him be given justice.

Most of Najib’s supporters gathered by the roadside and outside the court building.

Only individuals dealing with the court are allowed to enter, and the media must obtain an entry pass.

Critics have dismissed his supporters as nothing more than paid actors.

Judge Mohd Nazlan Mohd Ghazali sentenced Najib to 10 years in prison for each of three charges of CBT and three cases of money laundering.

Najib was also sentenced to 12 years in prison and a fine of RM210 million or five years for one charge of abuse of position.

The court session for today (23 August) will hear the arguments of Najib’s lawyer to set aside the conviction and sentence against him for misappropriating RM42 million in funds belonging to SRC International.