The man from Bukit Mertajam prayed in front of a paper effigy of the Ghost King. 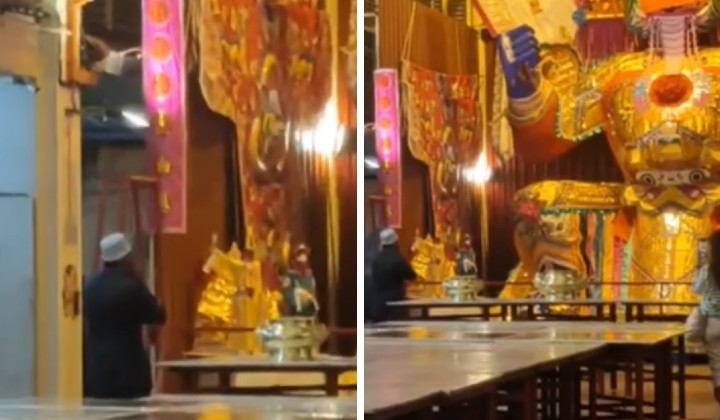 Police are investigating a viral video of a man who recited the azan (call to prayer) in front of a paper effigy.

The paper effigy appeared to be that of the Ghost King, Tai Su Yeah (King of Hades).

The incident is said to have happened between 26 and 27 July at Pertubuhan Yulan Bukit Mertajam.

An event was held there in conjunction with the Hungry Ghost Festival, which is celebrated in July every year.

It is the month where, according to Chinese folklore, gates of the lower realms are thrown open for spirits to roam the human world.

The video was uploaded by ‘Akademi Penyelidikan Agama Dunia’ on Facebook on Sunday.

Tan said the suspect was a local man in his 40s living in Jalan Kilang Ubi, Bukit Mertajam.

READ MORE: What Is The “Ghost Month” And How Does It Affect You?

Based on the testimony of the witnesses, we confirm that the suspect is a mentally challenged and demented person. This is the second incident, the first was in 2017.

Tan added that most people around the area are already familiar with the suspect.

The police reminded the public to respect each other’s beliefs and avoid any activity touching on the sensitivities between races and religions.