The Hungry Ghost Months lasts the full seventh month of the Lunar calendar. 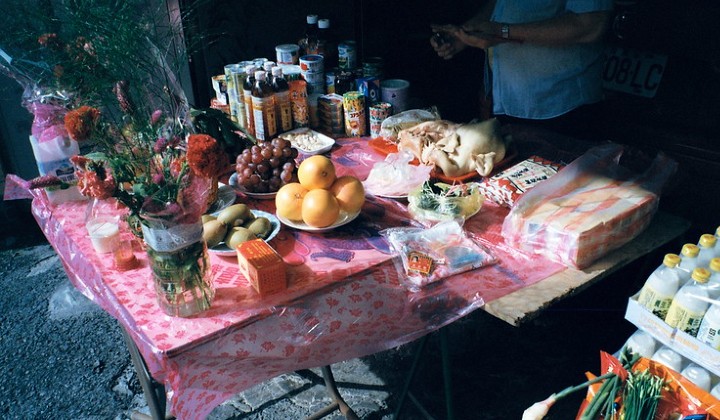 The Ghost Month falls on the seventh month of the Lunar calendar, which happens to be from 29 July to 26 August 2022.

This means that during this time period, you will see people burning joss sticks, leaving food on the sidewalk, and even full stage performances to an empty crowd.

READ MORE: Should You Be Afraid Of Or Celebrate The Hungry Ghost Festival?

Although the Hungry Ghost Festival falls only on one day (12 August), the entire month is considered the Ghost Month, and here’s why.

The Gates Of Hell Are Open

Basically, during the seventh lunar month, the gates of hell are open to allow ghosts to return to the living world in search of their family, food, and entertainment. (So essentially, even the ghosts get a month-long holiday!)

But because the gates of hell are very big and heavy, it takes two weeks for the gates to open fully. After all, these are gates to a whole ‘nother realm, so certainly the size will have to befit its significance.

Then the gates will stay open for a full day, which is the 15th day of the lunar month, the Hungry Ghost Festival. On this night, the gates stand fully open and all the ghosts will have come out to play.

After that, the gates will slowly close again, and take 2 weeks to completely shut. During this time, the ghosts will slowly trickle back into Hell before the doors shut to avoid being left behind in the realm of the living.

Well, it really depends on your belief, but as a general rule, it is advised to be more cautious during this time period.

This includes avoiding dark and dingy areas, staying out too late, water-related or dangerous activities and such.

Other advice may be a touch more superstitious, such as not taking pictures at night (lest you see something unwanted), hanging laundry at night (lest the ghosts decide to “try on clothes” and be brought home with you), and talking to yourself (lest ghosts see this as an invitation to interact with you).

Some superstitions even say you shouldn’t tap other people on the head or shoulders as it may put out the ‘soul fire’ and cause an adverse stroke of bad luck.

But perhaps above all, simply ignore weird, unexplainable, or strange happenings during this month, lest you find yourself the star of a horror movie.

If you have religious or superstitious friends, don’t take it personally if they decline your invitations to hang out for dinner or supper.

The closer the date gets to the Hungry Ghost Festival, the more likely they will choose to stay at home after the sun sets instead. Some families may even ban leaving the house at night entirely, even to throw the trash!

But Is It Bad?

Although it’s also known as Hell and is generally similar in concept, the Chinese understanding of Hell isn’t really all fire and brimstone.

Most ‘ghosts’ are just deceased souls who did not manage to ‘move on’ to be reincarnated, not demons or ghouls or otherwise (though these beings are also from Hell).

Instead, the ghosts are often held back by their connection to the living realm in some manner or form, such as worldly desires, regret, or unfinished business.

Most of them just want to see their families again, which is why the Hungry Ghost Festival is also a time for ancestor veneration. Families will provide prayers and pay respects to their deceased elders and ancestors, thanking them for looking after and guiding the family from the afterlife.

READ MORE: Hungry Ghosts Are Not Malicious, They Just Wanna See Their Families

What You Can Do

For the most part, daily life does not change. People still go to work and meet friends and do everything they used to.

But it also pays to be a touch more respectful, and don’t knock over food offerings on the roads or be unreasonably provocative. After all, who knows? With the supernatural, it may be safer to err on the side of caution.