When she refused to give her social media, he gripped her hand hard and pressured her still. 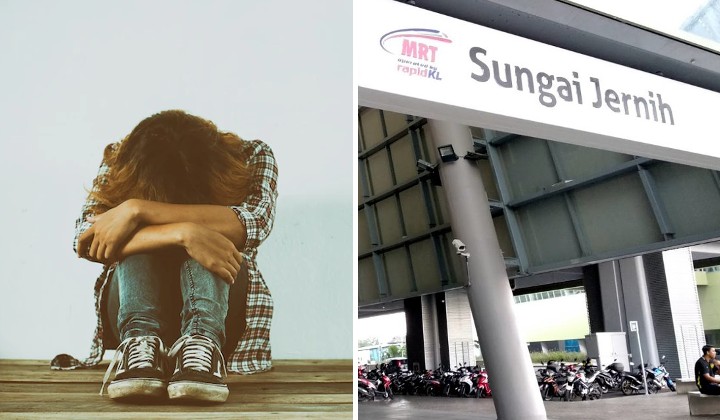 Public transportation is meant to get a person from one place to another, cheaply and safely (not really…). Imagine if you’re harassed on a train full of people (not an okay situation to happen btw), at least you have eye-witnesses and people there to help you.

But what if you get off the train in an empty station early morning or at night? The environment enough is creepy, coupled with the fact that a shady person is watching you? Double the paranoia.

As sadly as it is, this was the case for a young woman named Nad (@naddiiiee) in Sungai Jernih yesterday.

As she was at the station, a man approached her and handed her his phone. He ordered her to search her Facebook account for him to probably ‘friend’ her.

She refused as politely as she could as she wasn’t comfortable with a stranger knowing her social media. The guy insisted on her giving her details and said it’s no big deal for a guy to ask for this.

“There’s nothing wrong about it,” said the guy, while persistently pressuring her for her Facebook account and dragging her hand to the side of the station.

She told him that she was married, and he cynically replied, “Even if you’re married, there’s nothing wrong with us trying to get to know each other”.

“I was scared to death”

Nad, when the guy suddenly gripped her wrists with strength.

Then bravely, she threatened to scream if he didn’t let her go. He immediately let her go and headed for the escalator.

But it didn’t stop there

As Nad was walking away after the brief but terrifying incident, she noticed that the man was still following her, judging by the glass reflection at the station.

She quickly reached for her phone and called her boyfriend. Noticing her calling for help, the guy backtracked and used the lift to get down from the station.

Traumatised by the live incident, she broke down near the escalator, too afraid to go down, terrified that the man might be there, waiting.

She got away safely after ensuring no sight of the creepy man.

Nad reminded ladies out there to be careful wherever they are, especially on public transportation, while travelling alone.

Even though you’re accustomed to travelling alone, it’s better to be safe than sorry.

Here are some safety tips if you have to travel alone in a shady place:

TRP has reached out to @naddiiiee for further details on her harrowing ordeal.

READ MORE: Trolley “Helper” Stalks KL Woman To Her Car, Mall Management Gaslights And Laughs At Her Instead