The low horizontal clouds are not harmful unless it hits the ground. 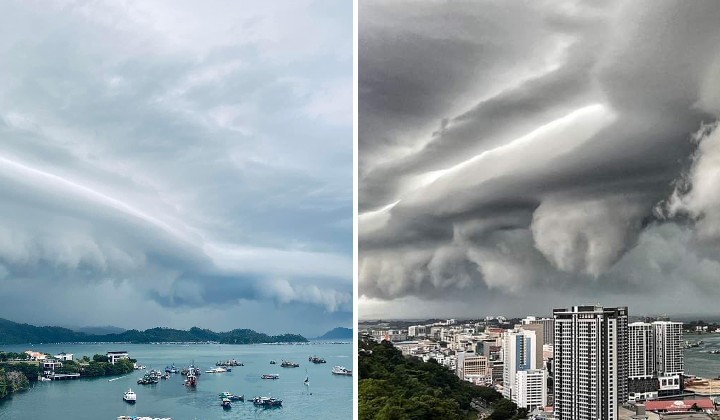 How would you react if you drove by the sea and suddenly saw these ominous clouds in the air?

Would you immediately take shelter or whip out your phone and take a picture, admiring the beauty?

This particular phenomenon happened in Kota Kinabalu on Friday morning (1 July 2022). Big spine-chilling tsunami-like waves were seen in the sky before a gust of strong winds and heavy rain came down that morning.

The Meteorological Department (MetMalaysia) issued an alert around 7 am on its Facebook page.

Locals were warned of a thunderstorm and heavy rain in Sabah’s Pedalaman (Sipitang, Kuala Penyu and Beaufort) and Pantai Barat (Papar, Putatan, Penampang, Tuaran and Kota Kinabalu) areas that would last for two hours.

Members of the internet, specifically in those areas, shared pictures and videos of the petrifying event in the comments section.

This phenomenon is known as the Arcus clouds. “No need for panic. Even though it’s an indication of bad weather, it’s not dangerous like a typhoon”, according to Dr Ramzah Dambul, a climatologist at University Malaysia Sabah (UMS), in his Facebook post.

“These types of horizontal low clouds are actually cousins with the Cumulonimbus clouds. Both of these clouds are formed due to the collision of hot and cold air, which is a non-stable atmospheric situation. That’s why, usually, after this phenomenon, strong winds, heavy rain and thunderstorms will follow”, he added.

He further mentioned that Cumulonimbus clouds (shaped like the Hiroshima mushroom cloud) formed at higher levels than Arcus clouds.

Cumulonimbus clouds are typically seen in tropical climate countries like Malaysia, but the arcus could, however, is a very rare sight. It is believed that it happened in Kota Kinabalu only thrice in a decade (June 2012, June 2016, July 2022).

Arcus clouds are more commonly seen around the world only in Queensland, Australia, around four times in October each year.

“So, don’t go hiding under your bed, trembling. Go and enjoy the breathtaking view from your balcony (not outside!) if this happens”, he further stated.

It’s Harmless Unless It Hits The Ground

In addition, in a report by the Borneo Post, the Director of MetMalaysia Sabah, Amirzudi Hashim, said that the phenomenon is harmless unless it hits the ground surface.

“The funnel cloud phenomenon occurs when a funnel-shaped cloud is formed from condensing water droplets, associated with wind strips that rotate and extend from the base of the cloud.

“When this phenomenon occurs on the surface of the water, it is called a water spout. It usually occurs in a short period of time and is harmless unless it hits the ground surface,” he said in a statement.

Phew, Now That The Panic’s Over, Enjoy Some Of The Views!

Here are some of the views shared on social media yesterday.

Here are some news coverages on the clouds in Perak and Sabah in 2016.