The house had suffered severe damage due to floods 30 years ago but was never destroyed until it was finally swept away this time. 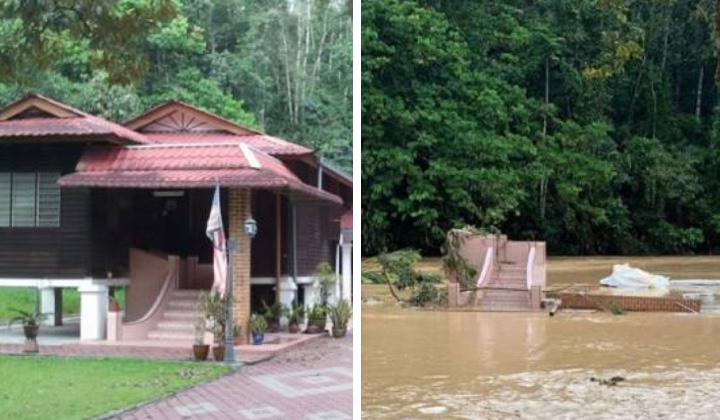 A family was left with only a staircase after their ancestral home was swept away by the flood.

Rodia Mahfuz, 56, said her parents’ ancestral house at Batu 18 in Kampung Jawa, Hulu Langat, was destroyed by water due to the recent heavy rain.

Rodia was quoted by Berita Harian as saying that the house was inhabited by her eldest sister, Rohana Mahfuz, 75.

Rohana had informed her that the water level started to rise in the house, at about 12 midnight on Saturday night.

Following the rising water level, the villagers advised Rohana to vacate the house and take shelter in the house of a close family member.

Rodia, who has six siblings including those living in Salak Tinggi, Bangsar and Melaka, said her eldest sister lives alone in the house ever since their parents died.

Fortunately, last night, my sister was able to go out by car to a relative’s house near the area. However, documents such as identity cards, furniture and other items could not be saved due to the severe flooding.

Rodia got the information that the house was swept away from another family member at 10 am on Sunday morning.

She asked relatives near the area to inspect the house and they later confirmed that it had been destroyed with only the stairs standing.

Rodia said the house had suffered severe damage due to floods 30 years ago but was never destroyed until it was finally swept away this time.

Nevertheless, she is thankful that no lives were lost.

Fortunately, there are neighbours who always care, they helped my sister to leave the house before it is too late.

Rodia expressing thanks to good samaritans.

Heavy rain since Saturday morning and high tides had caused several areas in Selangor to be inundated by floods.

Livelihoods were thrown into chaos as people struggle to save themselves while public infrastructures were also affected.

Government assets and agencies such as the Fire and Rescue Department, Royal Malaysian Police, and Malaysian Armed Forces are being deployed for the evacuation of victims and distribution of basic necessities.

At the same time, Air Selangor has been instructed to provide mobile water tanks at temporary evacuation centres.

Members of the public who need help can contact the Selangor State Disaster Management Unit at 03-50350920.