The Ipoh City Council is looking for the man who pulled off the stunt. 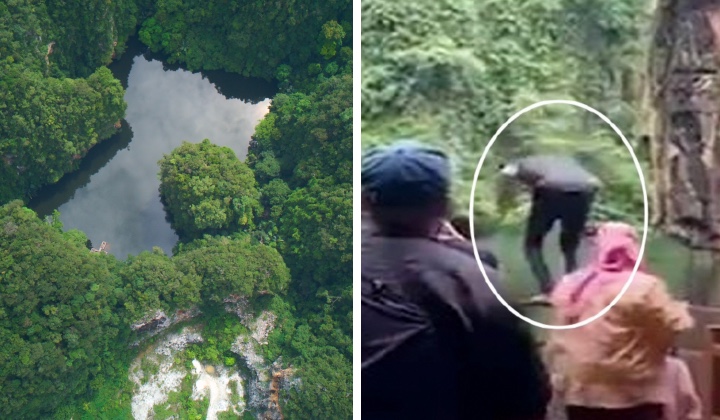 A video recording of a man diving into Ipoh’s famed Mirror Lake (Tasik Cermin) went viral after it was shared on Tiktok recently.

The 15-second video, which was uploaded by TikTok user @iamsyafiruz, drew various reactions from netizens.

In the video clip, which has more than 1.3 million views at the time of writing, a man dressed in black dived into the lake as if he was taking a bath.

Most netizens expressed dissatisfaction with the man’s actions as his folly could cause the recreation area to be closed to visitors.

There are concerns that his actions may cause the status of the lake as a Kinta Valley National Geotapak (Geotapak) to be revoked.

Ipoh Mayor Datuk Rumaizi Baharin was quoted by Harian Metro as saying that the risk is real.

He said Mirror Lake is listed as one of 18 Geotapak treasures and should not be treated recklessly.

It’s not just because we don’t allow (the dive), but because we need to preserve Mirror Lake, otherwise its status as a Geotapak will be revoked.

He added that as a result of the man’s stunt, Mirror Lake is closed for now.

Rumaizi said the public should be aware that this is one of the natural resources that must be taken care of for future generations.

At the same time, Rumaizi noted that authorities are actively tracking down the man who committed the irresponsible act for further action.

More To The Story

In the wake of the attention from netizens, @iamsyafiruz uploaded another video to give more details into the incident.

He claimed that the man in question is an Arab, and not a Malaysian.

In the 9-second video, the man was seen attempting another dive, but he fumbled and fell into the water.

In any case, netizens are not amused.

They questioned the motive of the man and also asked if there would be the third video.

Mirror Lake is located in the Gunung Rapat area which is famous for its beautiful karst hills that marked Ipoh’s landscape.

Due to its secluded spot, Mirror Lake had been largely unknown to most locals until very recently.

Nestled amidst quarries and temples that are located across Gunung Rapat, Mirror Lake is accessible through a man-made tunnel.

The lake’s popularity – due to reflections on its still water and the serene atmosphere –  skyrocketed in recent times thanks to the advent of social media.

According to a nearby resident who only wished to be known as Wong, visitors could previously take a boat ride at the lake.

However, vandals stole the boats and now vistors could only enjoy the lake’s serene beauty from the banks and a small pier.

Nearby resident Wong to TRP on vandalism at Mirror Lake

He added that quite a number of drones had been lost in the lake.

The drones were flown by visitors who wanted to capture the lake’s breathtaking natural beauty from above.