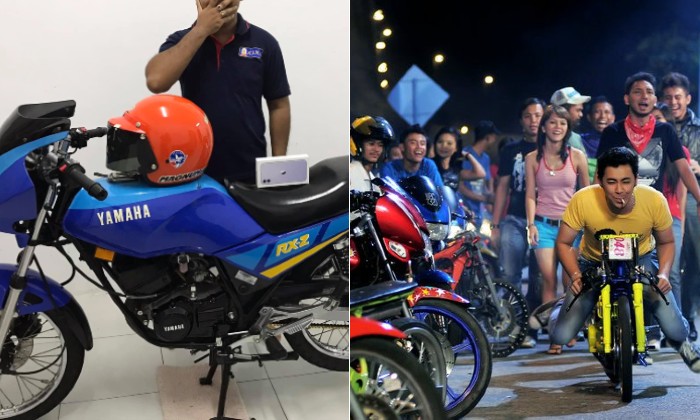 “Why so expensive?” asked Malaysians when coming across a recent social media post advertising the sale of a Yamaha RX-Z motorcycle that the sellers wanted to let go for what many say was an insane amount of money.

The sellers had apparently asked RM62,000 for the bright blue bike, and another RM65,000 for the orange Bell helmet that he had. As a ‘combo’ both the items could be purchased for only RM122,000. The seller also said that the price was of course negotiable.

Some netizens had themselves a laugh in the comments section and claimed that the seller must’ve had a few screws loose for making such demands.

But in less than 24 hours after the ad was posted, the owner shared that he had successfully sold his blue Yamaha RX-Z in cash for the price of RM60,000.

The guys even went on to thank netizens who had made the story viral enough making the bike that they affectionately call ‘Si Bojan’ easier to sell.

Commenting on the criticism Si Bojan received, the dudes simply said that some people just didn’t know the true value of certain items.

And they’d be right too!

Though we can’t tell you why they wanted to sell the orange Bell helmet for RM65,000, we think it’s a joke too, but obviously, we’re not in ‘the scene’.

What we can tell you is that it’s not uncommon for Yamaha RX-Z motorcycles to be sold for upwards of RM100,000.

Just last year, this one guy from Terengganu was ridiculed for wanting to sell his restored ‘Mili’ grey and white RX-Z for RM70,000 after the guy himself had spent around RM50,000 getting it in pristine condition.

Netizens had also criticized a local YouTube channel for having promoted a gimmick of selling a final-stock RX-Z for RM100,000.

The classic two-stroke engine RX-Z, manufactured by Yamaha, first debuted on Malaysian roads in 1985 and became an instant favourite among the country’s riders as well as the bikers over in Singapore.

The bike was especially popular among youngsters throughout the 80s and 90s supposedly for its sleek design, handling and of course, power.

It’s said that riders would continue to tune their RX-Zs in order to squeeze out every single bit of performance that the bike can give, and one can easily imagine convoys of RX-Zs cruising up and down the Peninsular much like what bikers do today.

There have been different variations of the bike made throughout its production, among the notable ones, the limited edition two-toned ‘Millennium RX-Z’ which came out in 2000.

The bike remained a favourite among Malaysian commuters throughout its entire production run which ended in 2011. Back then, the bike only cost around RM8,500 brand new.

Apparently, the RX-Z was also one of the most stolen motorcycles in Malaysia up until 2019.

Unfortunately, though, the RX-Z also retains a legendary reputation of being the bike of choice for Malaysia’s illegal street racers, stereotypically called the ‘rempits’.

Portrayals of the RX-Z would usually have riders performing stunts like the ‘superman’ while rocketing down the highway at breakneck speeds.

The bike was even the star of a few Malaysian ‘Mat Rempit’ movies.

But since the production of the RX-Z came to an end, the bike has become quite the collector’s item among local enthusiasts and motorcycle lovers. Some would even say that it is like a right of passage for a Malaysian rider to feel what it’s like to have an RX-Z between their legs.

It is also said to be quite difficult and expensive to get a hold of original parts and spares for the RX-Z, which appropriately adds to its perceived value.

So don’t be surprised the next time you see an RX-Z being advertised for a crazy price.

Read More: The Kapcai Conundrum: Should The Iconic Motorcycle Be Banned?