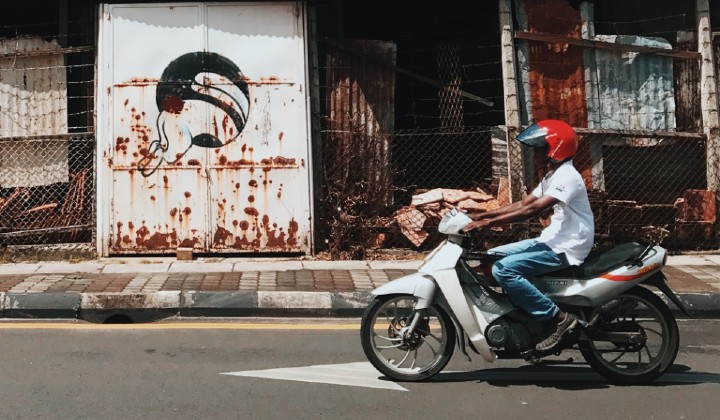 The underbone motorcycle, or â€œkapcaisâ€ as theyâ€™re affectionately called here in Malaysia, is probably one of the most important pieces of machinery in the country.

Since the first Honda Cub C70 came to our roads back in 1958, the kapcais have literally taken over the streets, serving as a cheap, reliable and resilient transport for the everyday Malaysian.

However, thereâ€™s been a lot of talk recently on how the age of the kapcai might be coming to an end.

Stakeholders in the transportation industry have been hinting at the idea of completely removing kapcais from the roads in favour of more modern, eco-friendly and safer vehicles.

Malaysiaâ€™s road accident fatality rate is the third-highest in Asia, and motorcyclists make up the bulk of that death toll.

Motorcycle casualties exceed that of any other road vehicle in the country.

According to the Malaysian Institute of Road Safety Research (MIROS) some 4,000 motorcyclists, mainly kapcai riders, are killed on the roads every single year.

Close to 5,000 motorcyclists (riders and passengers included) died in 2016 alone and this rate is cited to be on the rise.

It’s also unnerving to know that the majority of road casualties involving motorcycles involve the youngest members of our society.

Transport Minister Anthony Loke revealed that that 72% or the road accident deaths occurring in 2017 were youths aged between 16 to 30-years-old.

The concerning number of Malaysian motorcyclists dying on the road is basically the driver behind some of the radical ideas to putting an end to the use of kapcais in Malaysia.

Back in 2017, the former Federal Territories Minister Datuk Seri Tengku Adnan Mansor proposed to ban the use of kapcais within KL city limits.

And in early 2019, road safety activist Shahrim Tamrin spoke up on how Malaysia should move to replace the use of petrol-fueled bikes with low-powered electric motorcycles as an alternative means of personal transportation.

Though the Transport Minister had personally said that completely banning motorcycles on Malaysian roads was a rather impossible notion, there have been discussions to increase enforcement to specifically target kapcais and low-powered bikes.

The Road Safety Department (JKJR) have been studying to limit the use of motorcycles to only allow riders to navigate on the far left, emergency lane. An idea which was supported by the Works Ministry.

And a road safety activist group, Safety First, have been urging the government to impose new speed limits for kapcai or low-powered motorcycles, capping their speed at only 70 km/h.

As of 2017, there were nearly 13 million motorcycles registered across the country.

In 2019, that number grew to some 15 million, proving that the two-wheeled vehicle was a staple part of Malaysian life.

The allure of owning a motorcycle in Malaysia is quite high as the countryâ€™s poor public transportation system and high cost of living, especially in the city, drives demand for an affordable form of a personal vehicle.

According to a 2007 study by University Sains Malaysia (USM), lower-income groups (B40) and youths in Malaysia, rely heavily on owning smaller and lower-powered motorcycles as a cost-saving measure to meet their transportation needs.

This is mainly due to the fact that kapcais are cheap, cost less fuel to run, and require relatively low maintenance expenditure.

Speaking to some hardy Malaysian kapcai owners (who all chose to remain anonymous for some reason), we find that most Malaysian riders are against the idea of limiting or banning its use on roads as there are no other alternatives to the versatile two-wheeled transport.

The 25-year-old operations clerk from KL we spoke to has been riding a motorcycle all her life and says that the idea of banning kapcais was rather “ridiculous”.

Bikes are cheap. I save up on petrol, I donâ€™t need to pay tolls and I can get anywhere in a jiffy.â€

A 33-year-old delivery rider from Sungai Buloh mentioned that the reason why he chose to own a motorcycle in the first place was because of the freedom that the vehicle provides.

â€œItâ€™s affordable, I can use it for work and leisure without the hassle of being stuck in traffic. I can be where ever I want to be fast and easy.â€

Being in the gig economy, he explains that limitations on the speed limit or an all-out ban on the use of motorcycle would evidently affect his immediate source of income.

In my line of work, speed and timing mean everything. I canâ€™t afford to be limited and just travel at just 70km/h.

And if they ban the motorcycles off roads, how are we suppose to make a living?

A 25-year-old executive from Shah Alam feels that limitations on the use of kapcais wouldnâ€™t leave a dent on the countryâ€™s critical traffic accident rate if Malaysians are still not attentive towards road safety.

Itâ€™s the same whether you ban motorcycles or cars, the road would still be dangerous if road users do not have the proper attitudes and be safe and alert while riding or driving.

Though road safety is a major concern here in Malaysia, what would happen if we were to limit or ban a mode of transportation that is used by millions of Malaysians to get around?