Another addition to the long list of their offences. 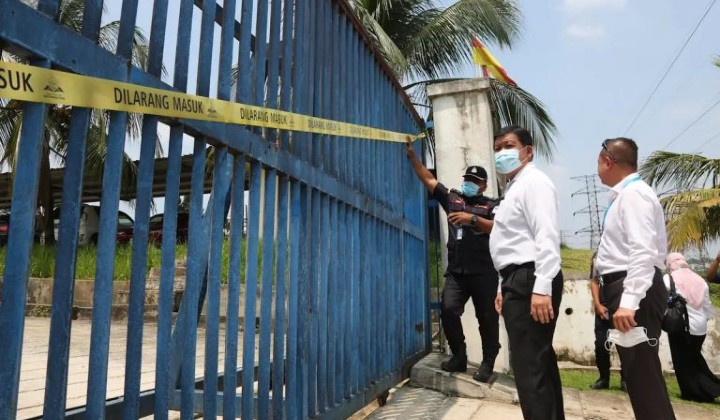 The factory believed to be the cause of the Sungai Gong pollution has reportedly been operating without any licence since 2014. This is based on data by the Selayang Municipal Council (MPS).

According to MPS Corporate Department Director, Mohd Zin Masoad, the company had not made an application for a licence or permission to operate since 2014, even though the local authority had advised the factory twice to apply for a licence after it was found operating without proper documentation for the past six years.

Apart from operating without permission, the factory which is believed to be involved in carrying out various other business activities had also constructed building structures within their premises without any written permission from MPS.

Mohd Zin was speaking to the press after posting a notice in front of the factory yesterday morning. He said the company was being given notice to prove that they had permission to operate and they had three days to do so.

The notice falls under Section 70(1) of the Road, Drains and Buildings Act 1974, which involves the construction of buildings or structures without permission from the local municipality.

At the end of the notice period, MPS will demolish the building structures.

On the company’s pollution offence, Mohd Zin said that issue fell under the purview of the Department of Environment.

On Thursday, 3 September, Air Selangor shut down four water treatment plants in Selangor due to pollution of raw water sources. This led to massive unscheduled water cuts affecting 1,292 locations across the Klang Valley.

Read more: Selangor Water Treatment Plants Have Resumed Operations, But It’s Still Gonna Be A While

Restoration of the water supply took four days to complete while Air Selangor worked to flush out the contaminants.

The owners of the factory linked to the pollution have since been arrested by the police.