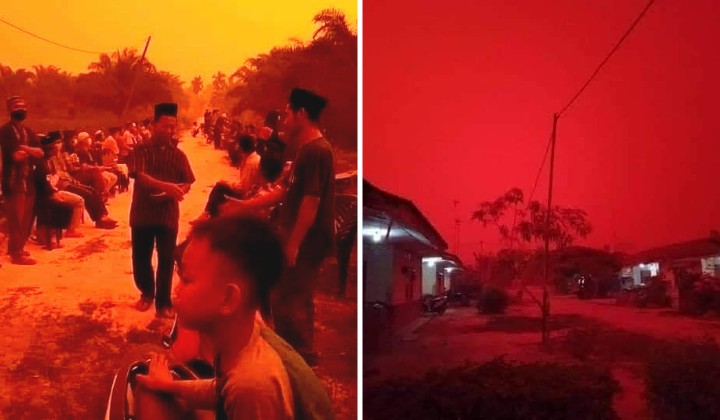 The skies over Jambi, Indonesia turned an eerie blood-red over the weekend.

Images and footage of the post-apocalyptic scene were popping up on social media.

I’m using english since I got moots from other countries as well.

this is the newest condition of my hometown, Jambi Province, without any filter. at the moment, Indonesia is fighting for forest fire. It’s been a couple months since the last time we- pic.twitter.com/Eqte8ahsjo

This’s afternoon is not night. This is earth not mars planet. This is not in outer space. It’s us who breathe with lungs, not with gills. We humans need clean air, not smoke.
Location: Kumpeh, Muaro Jambi #KabutAsap #KebakaranHutanMakinMenggila pic.twitter.com/WtEqPphgRT

What looked like a chapter ripped straight out of a science fiction movie, the hair-raising hue was evidently caused by the haze due to the extensive forest fires in the region.

The crimson glow was not directly caused by the fire, but instead from the smog that has risen up into the upper atmosphere.

The strange anomaly was a result of a phenomenon called the â€˜Rayleigh Scatteringâ€™ effect.

This occurs when sunlight is scattered by molecules in the air.

This effect is what makes our normal, earthly sky appear blue in the daytime and redden during sunset.

The smog, dust and airborne particles from the ongoing blaze in the region basically filter out shorter wavelengths of light (blues and greens) while dispersing longer wavelengths (red, orange, yellow), resulting in the Martian-esque scenery that you can see with the naked eye.

Historically, a similar setting happened before in Indonesia when the Krakatau volcano erupted back in 1883 and again during Mount Pinatubo eruption in 1991.

The volcanic ash coming from the Krakatau eruption turned the world’s skies red for months and was also considered to be the backdrop behind Edvard Munch famous painting, The Scream.

There are wonderous reasons for the many natural phenomena that occur on our planet, even during a man-made disaster such as the transboundary haze.