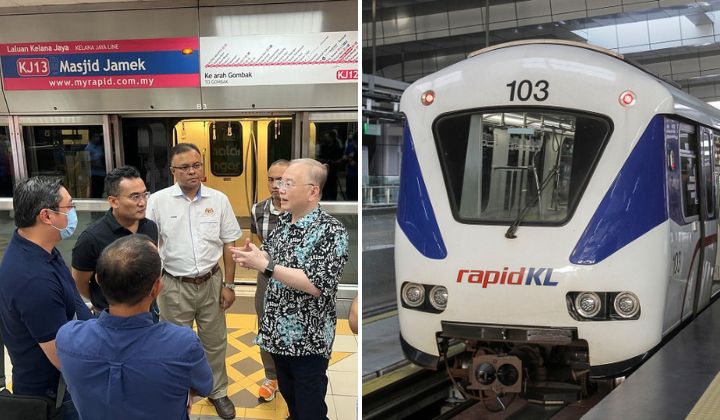 The Kelana Jaya LRT line returned to full-service today (14 November) at 6am after the completion of repair works and tests.

As compensation for the five-day disruption, the train rides are free for 7 days.

In a statement on Facebook, Wee said all parameters such as the train’s automatic system (ATC) are stable and working.

The overnight tests supervised by the Rail Enforcement Division, the Rail Planning Division and the Land Public Transport Agency (APAD) also showed that the train’s critical safety systems were working.

APAD also verified that the line is safe to be back in operation.

Meanwhile, Rapid Rail and the technical team from Thales Group, the original equipment manufacturer for the signalling system, will keep an eye on the system.

In addition, Prasarana will continue providing feeder buses at hot spot stations as a precaution.

Wee added that Prasarana has been asked to expedite the replacement of the Automatic Train Control system to ensure the issue doesn’t reoccur, with the first phase costing RM150 million.

In regards to the issue of compensation for affected travel pass holders, Wee said to wait for an announcement by Prasarana.

What happened to the trains?

Previously, 16 stations on the Kelana Jaya line were closed due to a fault with the train’s automatic system on Tuesday, 8 November.

The issue first reared its ugly head on 5 November but it was temporarily fixed before reoccurring a few days later.

The initial plan was to close all 16 stations between Kelana Jaya station to Ampang Park for almost a week for repair work.

Since the line services the busiest part of the city, this enraged many Malaysians who depend on the train to get to work and more.

The issue also made some Malaysians urge Wee to step down and for former transport minister Anthony Loke to take his place instead.