The graft busters said that the investigation paper on the scandal had been submitted to the Attorney General’s Chambers. 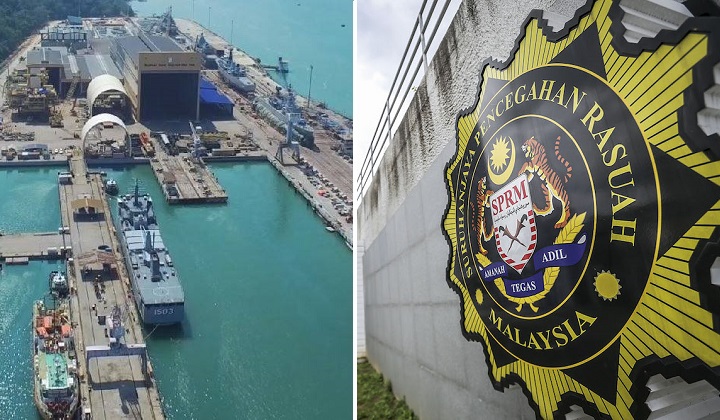 The Malaysian Anti-Corruption Commission (MACC) yesterday announced that it has completed investigations on several individuals that were linked to the delay of the RM9 billion worth of Littoral Combat Ships (LCS) project.

“The investigation paper has been submitted to the Attorney General’s Chambers with the MACC’s recommendation to charge several people in court.

“We will now wait for further instructions from the AGC,” the graft busters were quoted as saying by New Straits Times.

MACC’s announcement came a day after Prime Minister Datuk Seri Ismail Sabri Yaakob urged for its investigation of the ship scandal to be expedited.

In a statement issued on Wednesday, Ismail called for the attorney-general to prosecute all parties that were responsible for the mishap.

“I called Attorney General Tan Sri Idrus Harun and MACC Chief Commissioner Tan Sri Azam Baki after the Cabinet meeting to immediately act in accordance with the decision of the meeting,” Ismail said.

Ismail also said that the government had agreed to make public of the reports from the Special Investigative Committee on Procurement, Governance and Finance on the matter, which was chaired by former Auditor-General Tan Sri Ambrin Buang.

The project was handed to Boustead Naval Shipyard Sdn Bhd (BNS) in 2013 – through direct negotiation – which in return is supposed to build and delivered six LCS ships by the end of 2023.

However, with RM6.083 billion being paid to the contractor so far, none of the LCS ships had been completed while the project cost had overrun by RM1.4 billion, as per the finding of Parliament’s Public Accounts Committee (PAC) report which was released last Thursday.

Several high-profile individuals were also linked to the scandal, where they allegedly played a role in siphoning and abusing their power in the purchase dealing of these ships.

BNS, is a subsidiary of Boustead Holdings Bhd, with the Lembaga Tabung Angkatan Tentera (LTAT) being its largest shareholder.

In defending BNS, LTAT chief executive officer Datuk Ahmad Nazim Abdul Rahman said that the company had spent RM6.1 billion out of the RM9 billion contract to buy the materials and equipment for the ships in bulk as it would be cheaper rather than buying them individually.

He also added that under the current contract between the contractor and the government, the construction of all six ships must happen all at once.

It was reported that under the initial LCS contract, BNS was supposed to already deliver five vessels to the Royal Malaysian Navy (TLDM) by this month.

READ MORE: Najib To DAP: LTAT, The Army & The Rakyat Are My Cronies