6 combatant ships were supposed to build and delivered to the government by end of next year with five of those ships supposedly having been completed this month – but no ships are yet to be delivered despite the government had forked out RM6.083 billion so far. 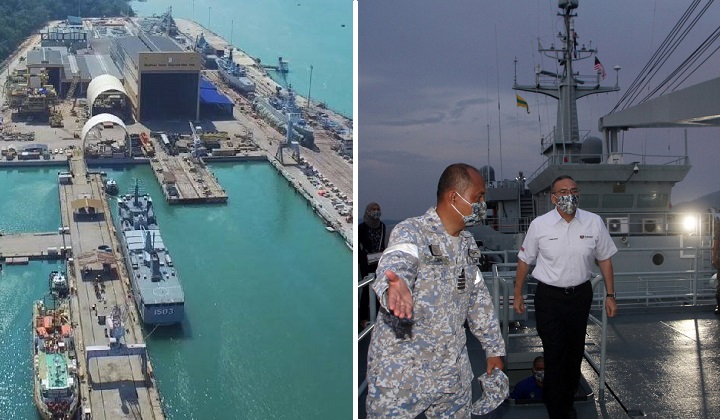 The Littoral Combat Ships (LCS) project, the largest procurement in the history of the Ministry of Defence (Mindef) with a total cost of RM9 billion, recently made headlines, all for the wrong reasons.

The project was handed to Boustead Naval Shipyard Sdn Bhd (BNS) in 2013 – through direct negotiation – which in return is supposed to build and delivered six LCS ships by the end of 2023.

BNS, is a subsidiary of Boustead Holdings Bhd, with the Lembaga Tabung Angkatan Tentera (LTAT) being its largest shareholder.

Five of those LCS ships were supposed to be already been completed and delivered this month, according to the project’s initial timeline.

The project was also halted for 29 months and was only resumed in April this year, as reported by Malaysian Defence.

However, with RM6.083 billion being paid to the contractor so far, none of the LCS ships had been completed while the project cost had overrun by RM1.4 billion, as per the finding of Parliament’s Public Accounts Committee (PAC) report which was released last Thursday.

The project was initiated in 2011, while Datuk Seri Ahmad Zahid Hamidi was the Defence Minister.

The 10-year project was commissioned in 2013 during Barisan Nasional’s (BN) administration.

The first ship in the class, the Maharaja Lela, was also launched in 2017.

The Maharaja Lela was supposed to be completed in 2019, followed by the next five ships in stages.

There have been several reasons given as to why no LCS ships had yet to be completed by NBS, including the change of the ship’s design, from the previously agreed Dutch-designed Sigma to French’s Gowind.

The change was approved while the Defence Ministry was being helmed by Datuk Seri Zahid Hamidi, in 2011, despite the project’s end user – the Royal Malaysian Navy (TLDM) – being against the decision.

Following the PAC report on the project, PKR deputy president Rafizi Ramli, who is also the former Pandan MP, alleged the existence of foul play behind the decision.

“RMN chose Sigma for its needs and wants to defend the country because it is better and more modern than Gowind. When Zahid changed the design to Gowind, this meant that the naval defence ability did not meet the wants and plans of the RMN.

“There are parties of interest who wanted the subcontractor from France to be chosen to supply the design and build the LCS although the RMN’s decision was to have the Sigma,” Rafizi was quoted by New Straits Times.

However, according to the PAC report, the main reason for the delay was caused by BNS’s poor cash flow and mismanagement of the finance of the project, as per revealed by the project’s former chief Captain (R) Azhar Jumaat.

According to Azhar, the payment that was received from the government was not being fully utilised for the project, which leads to the current predicament.

In explaining the project cost overrun, the PAC said RM400 million was used by NBS to repay previous debts incurred under the New Generation Patrol Vessel (NGPV) project, RM305 million was used for an integration facility in Cyberjaya, and another RM700mil was a cost overrun that exceeded the LCS contract ceiling.

In explaining the delay, LTAT CEO Datuk Ahmad Nazim Abdul Rahman said that BNS was supposed to build all six LCS ships concurrently – as per the current contract between the company and the government.

“Under the current contract, the construction of all six ships must happen all at once. Not build one, deliver one. The Lumut Shipyard is large and has the capacity to build all six ships to completion,” Ahmad Nazim was quoted by Malay Mail.

He added that RM6 billion had been spent to buy the materials and equipment for the ships in bulk as it would be cheaper rather than buying them individually.

He said that a huge portion of the total project cost went to the “basic design and detailed design” carried out by the Naval Group, adding that the cost for one ship is approximately RM1.5 billion under the original contract.

Ahmad Nazim also confirmed that the physical construction of the ships is ongoing.

The LCS scandal was billed as the “perfect storm” that could see the Opposition regain Putrajaya in the coming 15th general election (GE15).

In another Malay Mail report today, Pasir Gudang MP Hassan Abdul Karim said that the scandal would have a big impact and spur Pakatan Harapan’s chances to form the next government.

“Those responsible for the alleged mismanagement of public funds in the LCS scandal are Umno’s main leaders as well as those under BN.

“The issue of the LCS scandal, which was recently exposed, will attract a storm to collapse and topple Umno-BN once again in the upcoming general election,” the former Johor PKR chief was quoted as saying.

He pointed out that PH managed to wrestle five states in GE13 due to the RM250 million National Feedlot Corporation (NFC) scandal while the historic defeat of BN in 2018’s GE14 can be attributed to the 1Malaysia Development Bhd (1MDB) scandal.