The government had removed the subsidy for bottled cooking oil effective 30 June. 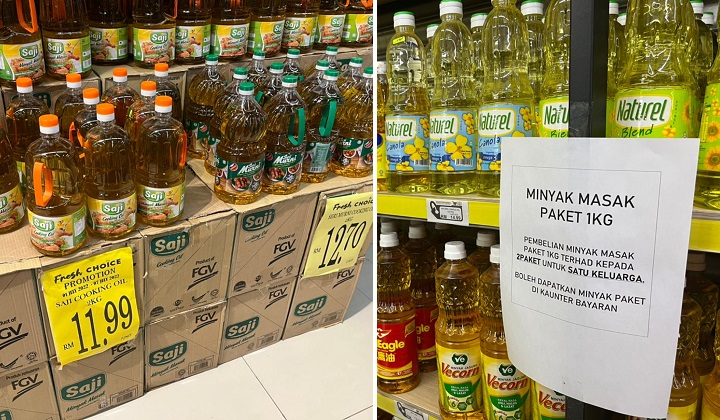 The ceiling price of cooking oil will be gazetted soon as there is enough provision under the current law allowing the Domestic Trade and Consumer Affairs Ministry to do so.

According to The Star, Tan Sri Annuar Musa, who is also the chairman of the Special Task Force Against Inflation said that the ceiling price for bottled cooking oil would be based on the current global market price of palm oil.

“The gazette process is expected to be completed in a week,”

“They can sell cheaper but not more than the maximum ceiling price gazetted by the ministry.

“They are no longer free to set the prices based on their wishes,” the Communications and Multimedia Minister, told a press conference yesterday.

This, said Annuar, would prevent sellers from profiteering excessively.

Meanwhile, Annuar also said that the government would also impose a ban on the export of cooking oil in polybags effective immediately.

This is despite the government only subsidising the cooking in 1kg polybags that were sold in the local market for household usage.

The Ketereh MP said that this is to avoid confusion as several quarters are claiming that they were permitted to export cooking oil that was packed in polybags.

“The committee has followed up with the relevant agencies to stop the export of cooking oil as this creates confusion,” he said.

Annuar also said that the task force that he headed would hold engagement sessions with political parties, student leaders and other parties alike to get their views on combatting the increasing price of goods.

The government removed the subsidy for bottled cooking oil effective 30 June, causing the people to lament the increased price of the item sold in the market.

Last Saturday, over 100 people attended the Turun rally held in Kuala Lumpur in protest of the recent rising prices of goods and living costs, as well as to call for Cabinet members’ salaries and allowances to be reduced.

Several UMNO Heavyweights To Be Dropped For GE15?