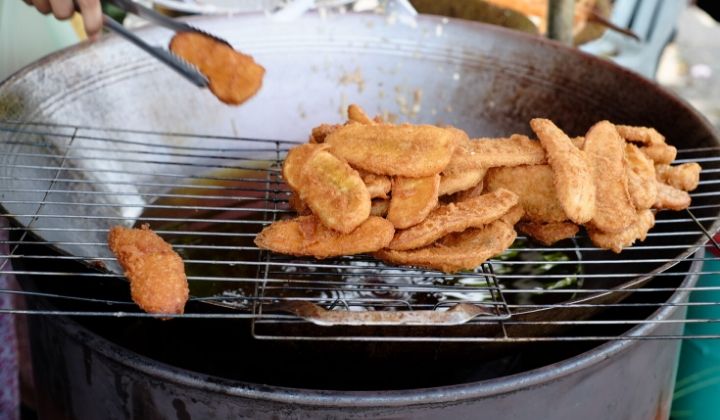 Subscribe to our Telegram channel for the latest updates on MCO, COVID-19, and other issues.

In less than 24 hours after the Prihatin Rakyat stimulus package was announced, Makcik Kiah became the most popular person in Malaysia.

#MakcikKiah was trending on Twitter last night and memes have started to appear on Facebook. Everyone – from ordinary Malaysians to corporate brands – is celebrating the mention of this pisang goreng seller who hails from Desa Tun Razak.

The reason why the rakyat love Makcik Kiah is quite obvious – she is the quintessential Malaysian makes an honest living, but is struggling like most of us during the Movement Control Order (MCO). Aside from worrying about income and the availability of groceries, she is probably also concerned about her family’s health – since her home in Desa Tun Razak is situated in Cheras, a red zone.

And the beauty about Prime Minister Muhyiddin Yassin’s analogy does not rest on the lovable figure of Makcik Kiah alone, but her family members as well.

They are the Malaysian family.

Makcik Kiah and her husband represent our parents, as well as those of us who just became new parents

All parents are the same – their top priority will always be to provide their family with the best they can afford.

Her husband is also someone who obviously cares for the country, joining the People’s Volunteer Corps (RELA) to help maintain peace and security in the neighbourhood. He is probably also helping the police to monitor public movement during the MCO period.

As for Makcik Kiah’s child, he or she represents all of us Malaysian youths

According to the Prime Minister’s analogy, anak Makcik Kiah could be a fresh graduate who is earning below RM2,000 per month. The child is also mindful of the family’s financial circumstances, as he or she opted to take a government education loan (PTPTN) when pursuing tertiary education.

Anak Makcik Kiah is also paying for some of the bills at home, like the rest of us. With all the savings he or she gets from utility bills and the PTPTN loan deferment, as well as the one-off cash aid, the child can probably continue to fork out some allowance for Makcik Kiah and her husband.

Needless to say, the child would be really happy that there will be free wifi and mobile data until the end of the MCO.

Makcik Kiah’s family is all of our families

There is a Makcik Kiah in every family, who probably makes really good pisang goreng or some other local snack.

There is her unnamed husband in every family, who is protective and cares about his country.

There is also her unnamed child in every family, who just wants to provide his or her parents with the best as well.