Disney aims to feature quality storytelling from creators and talented stars in the Asia Pacific region. 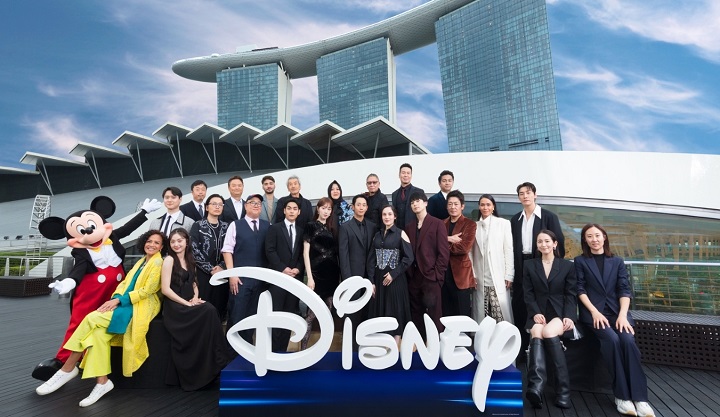 Our aspiration is for stories from the Asia Pacific region to be a key pillar for the next 100 years. Our curated content from APAC is a key part of the unparalleled storytelling and creative excellence The Walt Disney Company is known for, and we look forward to further showcasing storytelling excellence from the region on the world stage.,” said

TRP attended the Disney Content Showcase APAC 2022 to check out the list of exciting titles to keep an eye out for.

The content line-up from Indonesia features some of their best stars such as Adinia Wirasti (Mendua), Chelsea Islan (Tira), Deva Mahendra (Teluh Darah), and Refal Hady (Wedding Agreement The Series).

Horrorphiles should check out Jurnal Risa, a story based on writer Risa Saraswati’s experience with the supernatural.

An exciting array of Kdramas is coming to Disney Plus starring big names such as Choi Min Sik,  Lee Donghwi, and Squid Games’ Heo Sungtae in Big Bet.

Legendary actor Choi Min Sik returns to television for the first time in 26 years in a story about surviving insurmountable odds.

The other upcoming shows are:

K-pop fans will be delighted to watch their beloved idols in upcoming documentaries, namely:

Disney is collaborating with leading publishing house Kodansha to include Japanese anime in the streaming portfolio.

Some of the Japanese anime titles that will be available on Disney Plus are:

Other than anime, there are exciting and thrilling Japanese TV shows in the line-up such as:

Gannibal is a thrilling live-action adaptation of the hit manga about dark and mysterious disappearances in a remote Japanese village. The show will premiere in Disney Plus Hotstar on 28 December 2022.

Dragons of the Wonderhatch is the first Disney+ Hotstar original fantasy series from Japan and is a hybrid between live-action and anime. The story focuses on Nagi, a high school girl in the real world, and Tyme, a boy who lives in a world where dragon riders exist. It stars Sena Nakajima as Nagi, Daiken Okudaira as Tyme, Yoshito Emmanuelle playing Nagi’s friend Son, and Mackenyu Arata playing the dragon rider Akuta.

Mackenyu also stars in House of the Owl with Min Tanaka. The story follows
Ryutaro Ogami, Japan’s number-one fixer, revered for his ability to guide Japan’s politicians and most senior business leaders through sensational and career-ending scandals unscathed.

From Australia and New Zealand, the audience gets to enjoy psychological thrillers and dramas.

The Clearing is a psychological thriller based on the acclaimed novel “In the Clearing” by J.P. Pomare, while The Artful Dodger is a heist drama featuring a popular character from Oliver Twist.

In Disney’s first-of-its-kind collaboration with Pan-African comic book entertainment company Kugali, Iwaju tells the coming-of-age story of Tola, a young heiress from the wealthy island, and her best friend Kole, a self-taught tech expert and loving son from the mainland, both of whom must challenge the status quo.

As Walt Disney Animation Studios celebrates its 100th year, the all-new original
feature film Wish asks the question: “How did the wishing star, upon which so
many Disney characters wished, come to be?”

Wish features the voices of Academy Award®-winning actress Ariana DeBose as Asha, and Alan Tudyk as Valentino, a pyjama-wearing goat. The epic animated musical is helmed by Chris Buck (Frozen, Frozen 2) and Fawn Veerasunthorn (Raya and the Last Dragon).

Marvel Studios will begin its Phase 5 with Ant-Man and the Wasp Quantumania. The other titles in store include:

It’s not the first time or the last time that Disney will remake its classics into live-action movies with a twist.

The Little Mermaid features Halle Bailey as Ariel and a host of talented casts such as Awkwafina, Daveed Diggs, Javier Bardem and Melissa McCarthy as the sea-witch Ursula.

In Snow White, Gal Gadot assumes the role of the Evil Queen while Rachel Zegler plays the titular character.

In Mufasa: The Lion King, the audience goes back into the past to witness how Mufasa became one of the greatest kings of the Pride Lands.

The Haunted Mansion, inspired by the classic theme park ride, arrives a little late for Halloween but will continue to serve a spooky yet entertaining story.

The audience can expect more stories from the world of Star Wars and the return of the iconic adventurer Indiana Jones.

Prepare to cry your eyes out with heartfelt shows from Pixar (as always).

Elemental is inspired by director Peter Sohn’s childhood in New York after his parents emigrated from Korea in the early 1970s and built a bustling grocery store in the Bronx.

READ MORE: Director Peter Sohn Shares His Story In Pixar’s Elemental And The Challenges Of Making The Film

The four upcoming animated shows to look forward to:

James Cameron brings the audience back to Pandora. Set more than a decade after the events of the first film, Avatar: The Way of Water begins to tell the story of the Sully family (Jake, Neytiri, and their kids), the trouble that follows them, the lengths they go to keep each other safe, the battles they fight to stay alive, and the tragedies they endure.