Pixar’s Elemental is partly inspired by his childhood in New York and his romantic experiences. 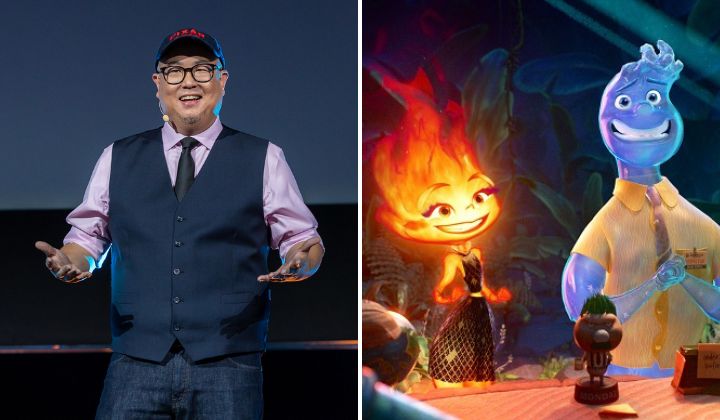 Disney and Pixar’s Elemental is an all-new, original feature film set in Element City, where fire-, water-, land- and air-residents live together.

The story introduces Ember, a tough, quick-witted and fiery woman, whose friendship with a fun, sappy, go-with-flow guy named Wade challenges her beliefs about the world they live in.

Elemental is inspired by director Peter Sohn’s childhood in New York after his parents emigrated from Korea in the early 1970s and built a bustling grocery store in the Bronx.

The film features the voices of Leah Lewis and Mamoudou Athie as Ember and Wade, respectively.

TRP sat down with Peter Sohn (The Good Dinosaur, Partly Cloudy) recently to talk about the animated film which is scheduled for release on 15 June 2023 on Disney Plus Hotstar (the interview has been edited for length and clarity).

With Elemental, I had more time because it’s the story of my life. However, it was a bit of a challenge trying to remain impartial to a personal story.

So the real big lesson is to step back and be objective. It’s realizing that the story is not about me and it’s not an autobiography. I’ve got to let it be free and use that sort of objective nature from making The Good Dinosaur to get through in Elemental because it takes a long time to make these things.

What were the challenges faced in making this movie?

We don’t have the technology or the pipeline to make a character that was an effect and to make every shot of the film have an effect in it. Those two challenges were really difficult but the collaboration between the art and tech side helped get us close (to the vision).

Some of our early tests of Ember were real fire with eyes and it was terrifying. It was so scary and you just wanted an exorcist to pick up the demon out of Ember.

Daniel, one of our artists, took an iPhone footage of a fire in his backyard. He then took the frames out and painted, trimmed, and animated a fire character that felt like it could burn you to the touch but still be really appealing. It was a very long process.

The water character is still the hardest because it’s constantly moving. For example, Wade’s face is so simple but it can sometimes look weird and the light goes through his face.

There are a lot of talented people at Pixar that are way smarter than me and they have been able to find a way to translate this stuff. There are three months to go to finish the film so hopefully, we’ll be able to finish it in time.

What inspired the story and the world of Elemental?

I remember taking my wife’s family to a Korean restaurant and they were not used to spicy food.

There’s a moment in the film where Wade has to try really fiery hot food and it was definitely taken directly from my experiences with the mixing of cultures.

So this is sort of a love story between these two characters (fire and water), but then a story about a daughter and a father started to form and evolve through the years of making this story.

Which character or element do you identify with?

I’m water for sure. I wish I was more fire but I can be very emotional and I cry a lot. If I’m honest, I’m a sap. I love K-dramas and my family and I are always crying at K-dramas.