Fan favourites such as Hocus Pocus 2 and Disenchanted are set to entertain everyone from this year onwards. 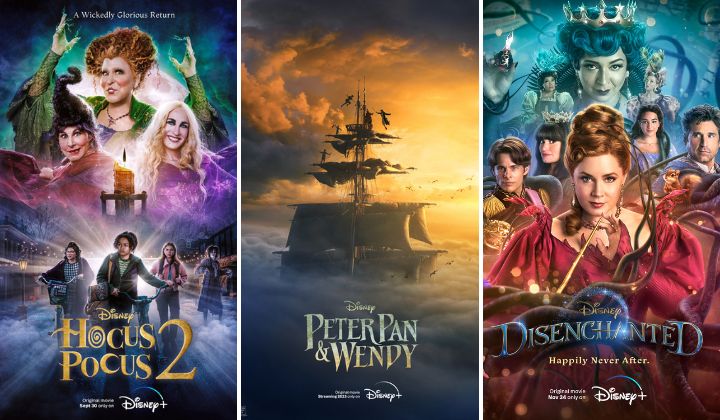 The Walt Disney Studios have announced a slew of upcoming films at the D23 Expo 2022. Some of the titles will be familiar because they are live-action remakes or sequels to the films adored by many fans.

Here are some of the live-action films in store:

Everyone is familiar with the story of Pinocchio, the wooden puppet who longs to be a real boy.

This time the touching tale is brought to life by stars such as Tom Hanks as Geppetto, Benjamin Evan Ainsworth as Pinocchio and Joseph Gordon-Levitt as Jiminy Cricket.

In the live-action film, Oscar nominee and Tony Award winner Cynthia Erivo, who voices the Blue Fairy, sings the popular song “When You Wish Upon A Star” instead of the character Jiminy Cricket.

Pinocchio is already available to stream on Disney Plus Hotstar.

Twenty-nine years after being banished from the town of Salem, the Sanderson sisters (played by Bette Midler, Kathy Najimy and Sarah Jessica Parker) return once again to wreak havoc on the town.

This time, a trio of high schoolers (played by Whitney Peak, Belissa Escobedo and Lilia Buckingham) have to stop the ravenous witches from exacting their revenge before dawn on All Hallow’s Eve.

Hocus Pocus 2 debuts exclusively on Disney Plus Hotstar on 30 September 2022.

The musical comedy picks up 15 years after Giselle (Amy Adams) and Robert (Patrick Dempsey) get married and the family heads to suburbia in search of happily ever after.

However, real life is tougher than a fairy tale and Giselle soon finds it hard to maintain the life she wanted.

Desperate to cling to her dream, her one wish might destroy everything she holds dear.

Disenchanted streams on Disney Plus Hotstar on 24 November 2022.

Disney has also revealed a few live-action titles that will be released from next year onwards.

Just revealed at #D23Expo ✨Check out the new poster for #PeterPanandWendy. Streaming in 2023 only on @DisneyPlus. pic.twitter.com/UJNv5YglHt

Most of us know about the story of a boy who refused to grow up. In this live remake, the story dives deeper into Wendy’s story when she joins Peter Pan on a magical journey to Neverland.

The history behind Peter Pan’s rivalry with one of Disney’s most memorable villains, Captain Hook, will probably intrigue the audience.

Peter Pan & Wendy is tentatively set to debut on the streaming service in 2023.

While the 2003 film starring Eddie Murphy was considered a box office failure, the film gained better reception among the audience and achieved cult status among viewers over the years.

Inspired by the classic theme park attraction, the Haunted Mansion reboot tells the story of a woman and her son experiencing supernatural disturbances in their home.

They enlist a motley crew of so-called spiritual experts to help rid their New Orleans home of supernatural squatters.

The story will be brought to life by stars such as Rosario Dawson playing the single mother Gabbie, Chase Dillon as Gabbie’s son, and Jamie Lee Curtis as Madame Leota.

Owen Wilson plays the priest named Kent who in turn enlists the aid of Ben Matthias (played by Lakeith Standfield), a widowed scientist-turned failed-paranormal expert,  Harriet (Tiffany Haddish), a French Quarter psychic, and a historian played by Danny Devito to exorcise the mansion.

There will also be cameos from actors like Winona Ryder, Hasan Minhaj and Dan Levy.

Haunted Mansion is tentatively set to be released next year.

For those who have forgotten, Mufasa is the father of Simba (and probably also Nala’s father but that’s a story for another day).

In this prequel, the story of Mufasa as a young lion cub who rise to be one of the greatest kings of the Pride Lands will be told in flashbacks by Rafiki, Timon and Pumbaa.

Mufasa: The Lion King will release somewhere in 2024.

In this other rendition of the classic tale, Rachel Zegler plays Snow White while Gal Gadot plays the stepmother, The Queen.

Out of the sea, wish I could be… part of that world.
Disney’s The Little Mermaid is coming to theaters May 26, 2023. pic.twitter.com/2WGtf2wN3n

The Little Mermaid is pretty much about a story of a mermaid who dreams of becoming a human so she can discover the world above water.

In this adaptation, Ariel will be played by American singer and actress Halle Bailey (who’s also one half of the musical duo Chloe x Halle).

Her posse Sebastian, Flounder and Scuttle will be voiced by Daveed Diggs, Jacob Tremblay and Awkwafina respectively.