The residents took an ingenious approach to get attention from the authorities to fix the numerous potholes. 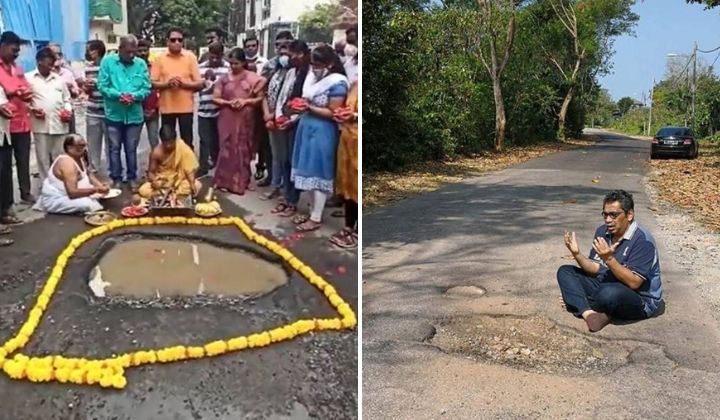 Potholes on the roads are a global problem in any city. For some reason, it’s tough for everyone in the world to get a hold of the proper authorities to take action.

Locals in Bengaluru have resorted to creative ideas such as planting paddy and boating on roads with potholes to draw attention from the authorities.

Despite their best efforts, they couldn’t get the authorities to fix more than 100 potholes along Charles Campbell Road.

Having had enough of being ignored, the Bharathinagar Residents Forum performed a special yagna and pooja around one of the potholes.

According to The Indian Express, they placed flower garlands around the potholes on the roads on Tuesday morning.

Potholes are aplenty in Malaysia too

There are plenty of potholes on Malaysia’s roads as well. Back in December 2020, Khairy Jamaluddin, who was the Science, Technology and Innovation Minister then, took a rough tumble after hitting a pothole while cycling.

However, the Kuala Langat Public Works Department (JKR Kuala Langat) was quick to repair the road and was lambasted by netizens for the double standards.

A few days after Khairy took a tumble, a 75-year-old man hit a pothole while travelling along Jalan Connaught towards Mid Valley Megamall from Cheras.

READ MORE: 75YO Elderly Man Dies After Motorbike Skidded Over Pothole In Cheras

According to Today Online, the Science, Technology and Innovation Deputy Minister Abu Bakar Mohamad Diah had to pull a similar prayer stunt to get the local authorities to fix the potholes at Jalan Bukit Berlian, Bukit Rambai on 20 February.

In October 2021, the Federal Territories Minister Datuk Seri Shahidan Kassim announced that the rakyat could contact him and his Deputy, Datuk Seri Jalaluddin Alias or the KL mayor Datuk Seri Mahadi Che Ngah if they see any potholes.

READ MORE: Call Me If You See Potholes In KL, Says FT Minister

While it was a laudable gesture, Shahidan was inundated with more than 1,000 calls and it jammed his phone.

According to Malaysiakini, Shadidan said he received all sorts of phone calls, not only about calls relating to potholes.

The calls he received included applications to get into the People’s Housing Programme (PPR) and requests for financial aid.

Despite the neverending calls, Shahidan said he intends to answer every call and asked the rakyat to send him a text message if he missed their call.