Aside from wishing him a speedy recovery, people jokingly began calling on KJ tour the country on his bicycle. 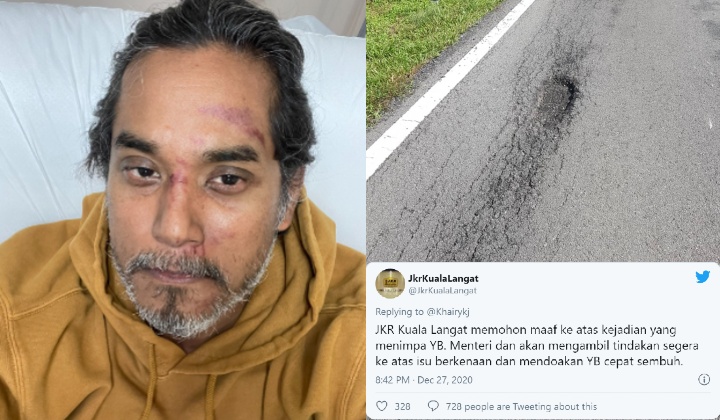 Yesterday, while out cycling, Science, Technology and Innovation Minister Khairy Jamaluddin Abu Bakar, who is commonly referred to as KJ, took a tumble after hitting a pothole and suffered a few scrapes and bruises across his face.

After he gamely tweeted photos of the offending road and his injuries, the Kuala Langat Public Works Department (JKR Kuala Langat) quickly replied with an apology and promised to act immediately to repair the road.

Following their swift action, and aside from wishing him a speedy recovery, people jokingly began calling on KJ to tour the country on his bicycle.

Lots of holes along the roads everywhere YB, even in Nilai. Need to urge the Munipil Councils of each district to look and act thoroughly on this matter so accidents and such won’t happen.

This is because KJ’s spill highlights the deplorable state of roads across Malaysia which have damaged vehicles, caused injury, and even killed some road users.

However, the speedy response and apology by the Public Works Department (on a Sunday, no less) also highlights a double standard that many Malaysians would agree exists between the leaders of the country and the rakyat.

When a normal citizen hits a pothole and even dies, they ignore it.. Till there’s even a need for a letter to process. Hmmmm its sad when there are double standards like this.

Normal citizens even when they die the road isn’t repaired.

So far, neither KJ, nor the Public Works Department have commented further on this matter, though there were some Twitter users who urged for the Minister to raise the issue in Parliament.