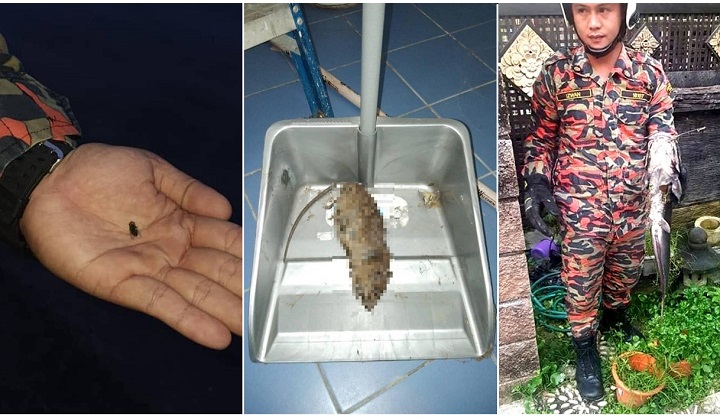 This is something the brave men and women of Malaysiaâ€™s Fire and Rescue Department (aka Bomba) know only too well.

Their selfless antics in rescuing poor souls in the most life-threatening situations have basically made them national heroes, but also the ones who get called for anything that goes wrong. Like all these calls that were made in 2019â€¦

Back in June 2019, a traumatised pet owner rang up the Shah Alam Fire Brigade after her pet catfish killed, well, her cat. (Oh, the irony)

Fearing for the safety of her son, the 49-year-old woman pleaded for the nonplussed firemen to come apprehend the murderous fish that apparently stung the cat from its outdoor pond.

While the department initially dismissed her call as a non-emergency, her teary appeals eventually led to 5 firemen showing up and nabbing the lethal killer.

Call it what you want, but we think a Kelantan man probably made the biggest cock-up of his life when he got his hardware caught between the cogs of a bicycle gear.

While no one knows how the 34-year-old man managed to stick his shift into the gear, he was at least conscious enough to waddle his way to the nearest Bomba station to put out the figurative fire on his crotch.

If youâ€™re wondering, yes thereâ€™s a happy ending. He was brought to the doctors who managed to tug off the gear with the use of a specialised tool – which is what we assume the Bomba and doctors also call him.

Thereâ€™s nothing more horrifying that receiving an emergency call that there might be a rotting human corpse somewhere near your home.

And so, the Bau Fire and Rescue Department leapt into action â€“ rushing to the foul-smelling home and checking every nook and cranny to discover the rotting corpse of aâ€¦ rat!

The deceased critter had apparently been rotting away in the ceiling, which caused the stench to waft into the house.

Some kids will do anything just to see their heroes in action, like this particular pair of siblings in Kelantan who started fires in 11 properties just to watch the Bomba battle the blaze.

The juvenile arsonists, aged 10 years old, apparently brought down 8 homes and 3 rental units in 3 months. They were soon arrested for causing mischief by fire or explosives although they two denied the allegations.

Finishing 2019 with a buzz, members of the Alor Setar Fire and Rescue Department had their first ever fly catching case.

The firemen were not moonlighting as pest control, but were in fact called to investigate a distress call of strange sounds emanating from inside a cupboard, believed to be a snake.

As it turns out, the deadly noises were from a distressed green bottle fly stuck in the cupboard instead.

While it may be tempting to call emergency personnel at times of suspected duress, it should be noted that emergency calls are no joke.

Every call made to 999 gives access to emergency services of 5 agencies:

In the case of the fly, deputy director of the Kedah Fire and Rescue Department, Sayani Saidon, told Harian Metro that such calls would likely slow down their response to a real emergency like fires, drowning or accidents.

It should also be noted that wasting the time of emergency personnel is a serious crime. Making prank calls to 999 can result in a maximum fine of RM50,000 or a year in jail or both under Section 233 (1)(B) of the Communications and Multimedia Act 1998.

So the next time you feel like calling the Bomba to come to the rescue, just make sure itâ€™s a real emergency.

Please call 999 in the case of actual emergencies. Itâ€™s also advised to have the numbers of relevant regional police, fire department and hospitals.