The latest list by TasteAtlas drew criticism once again from netizens around the globe. 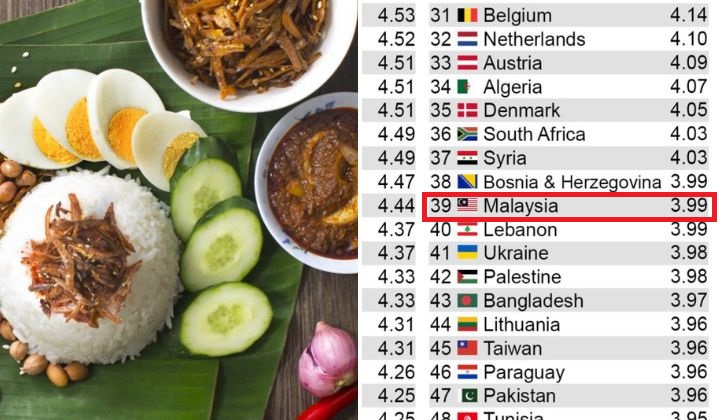 Once again, TasteAtlas’ list of the best cuisines in the world has drawn criticism from many, especially Malaysians after Malaysia placed 39th in the Top 50 category.

According to TasteAtlas, some of the best-rated foods in Malaysia are roti canai, curry puffs (karipap), satay celup, roti pisang, and nasi lemak.

The 2022 ‘Best Cuisines in the World’ rankings, conducted by @TasteAtlas.

The other Southeast Asian countries that made it into the Top 50 list are:

Netizens found it hard to believe that the food in the United States of America (8th) ranked higher than France (9th place).

Others also questioned the rankings when none of the Caribbean or African nations showed up on the list and wondered how England made it into the list.

For comparison’s sake, England ranked 29th, a step above Thailand!

Immediately bullshit when USA is above France

The fact that not one Caribbean or African nation shows up tells me there is something not qYT right about this pic.twitter.com/C1rtaRjWWB

and what exactly is “united states cuisine”? 🤔

There’s no way Southeast Asian countries below US 💀💀

English food being directly above Thai food removes all credibility from the list. https://t.co/Ng4aX4Ngkd

Earlier in the June 2022 list, Malaysia ranked 46th out of 50 countries. The list has been contested by people from other countries when it placed several European countries ahead in the top 10 positions.

In a comment to The Vibes, TasteAtlas defended its methodology to determine the ranking after the previous backlash.

They explained that users were given free rein to rate the dish and artificial intelligence was used to establish and validate genuine ratings.

TasteAtlas is a Croatian-based project founded by journalist and entrepreneur Matija Babic. Its interactive website is akin to an encyclopaedia of food worldwide, highlighting traditional dishes and local ingredients in authentic restaurants.