We weren’t prepared for the garlic. 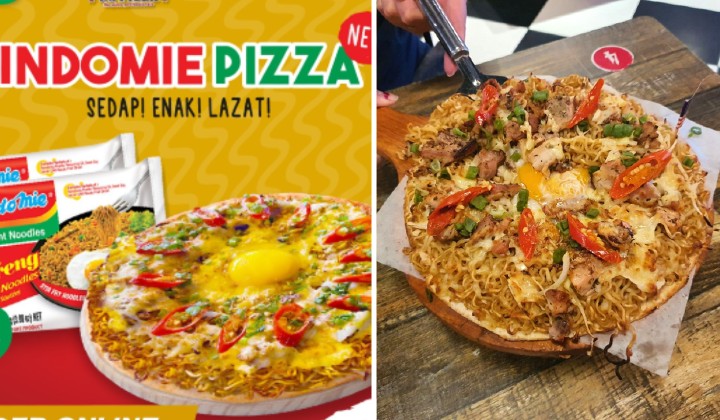 You may have seen posts for the Indomie Pizza online and wondered to yourself, what abomination has the world come up with today?

After all, instant noodles and pizza are not the healthiest of food choices, and then someone decides it’s a good idea to put them together.

Yet I couldn’t help being intrigued by it, because I love both pizza and Indomie, but will I still love it if it’s mashed together in some unholy combination?

The Indomie pizza was created by local pizza chain US Pizza, which serves quite a number of “gimmicky”, non-traditional pizza flavours such as sambal petai pizza and musang king durian pizza.

The interior of the restaurant give a decent impression of old-school American diners, complete with wood and brick decorations, arcade machines, and bright red seats. They were also playing an enjoyable playlist of classic American country blues, which lent heavily to the small-town America vibes.

The charming decor didn’t negate the relatively long wait for the food, however, as I am used to my pizzas being fast.

Still, considering that it’s a specialty menu item, it probably took more preparation and care than the regular pizzas.

The Indomie Pizza In All Its Glory

My first impression of the Indomie pizza is actually how colourful it is, thanks to the big slices of chili and generous sprinkle of spring onions. A telur mata sits right in the middle of the pizza.

A crunchy thin pizza crust is topped with a generous layer of perfectly cooked Indomie (at a glance, about 3 packs’ worth of noodles). Then, it is topped with black pepper chicken chunks, chili, spring onion, lots of cheese, and an egg.

But Is It A Party In Your Mouth?

While some gimmicky fusion foods tend to have an identity crisis, there’s no mistaking that this dish is a pizza first and foremost. It doesn’t really let you forget that the noodles are merely the player, while the pizza is the whole endgame.

The Indomie is handled especially well, being cooked perfectly so that it isn’t soggy or undercooked. The outer bits have some crunch to it, crisped up by baking, that adds a nice texture. The seasoning used for the noodles are just right too: flavourful but not overwhelming.

The garlic cheese thin crust is delightful, especially if you are a fan of garlic and cheese. There are added bits of chopped garlic and cheese pockets within the noodles, so each bite is always a good reminder that you’re eating a pizza.

The black pepper chicken chunks also deserve a special mention for being juicy and well-seasoned, in pieces big enough to be properly savoured.

I was fully prepared to write the pizza off as a gimmicky marketing ploy, but I must admit that the Indomie Pizza is shockingly enjoyable.

With a pretty decent price tag at RM28, it makes for a fun meal option and the perfect size for two people.

It’s an example of fusion food done well. You don’t lose the feel of eating a pizza, but there’s also a lovely addition of familiar springy noodles.