The mother of Ainul Mardhiah has never asked the public for money. 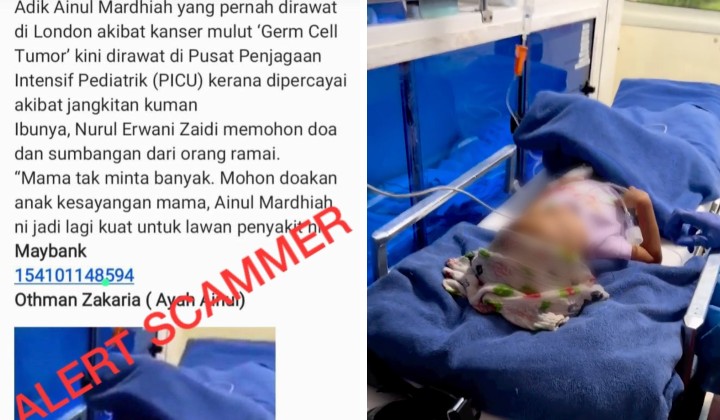 The mother of Ainul Mardhiah Ahmad Safiuddin, a child who used to suffer from Germ Cell Tumor, had warned against a fake charity collection.

Through a post on the Instagram page, Ainul’s mother, Nurul Erwani Zaidi, requested that the ‘scammer’ not take this opportunity to make money from the public.

Nurul explained that as a biological mother, she never wrote a post on social media to ask for donations but only asked for people’s prayers.

Previously, the story of the suffering of Ainul Mardhiah, who had to undergo surgery in London, United Kingdom, to remove a tumour weighing 200 grams, has received public attention.

Following that, a few irresponsible parties tried to take advantage of the concerns of Malaysians by collecting donations using the child’s photos, more fondly known as Baby Ainul.

The child is currently treated at the Pediatric Intensive Care Unit (PICU).

It has been reported that the health condition of Ainul Mardhiah is improving.

This morning, Ainul has started drinking milk. Ainul has been fasting for two days and has not been able to drink milk.

Nurul Erwani said her child started showing symptoms of vomiting and diarrhoea before being rushed to the hospital by ambulance.

After an examination, the doctor informed the mother that the infection had spread throughout the body.

Nurul Erwani said she also felt like a failure for not paying enough attention to Ainul Mardhiah during the delivery.

In addition, she also took the opportunity to advise the public.

She said there are viruses everywhere and urge people to take care of hygiene even if just staying at home as things could happen.

Her plight had caught the nation’s attention, including that of politicians and ministers who wished her a speedy recovery.