The incident happened at the Tun Dr Lim Chong Eu Highway at 4 am. 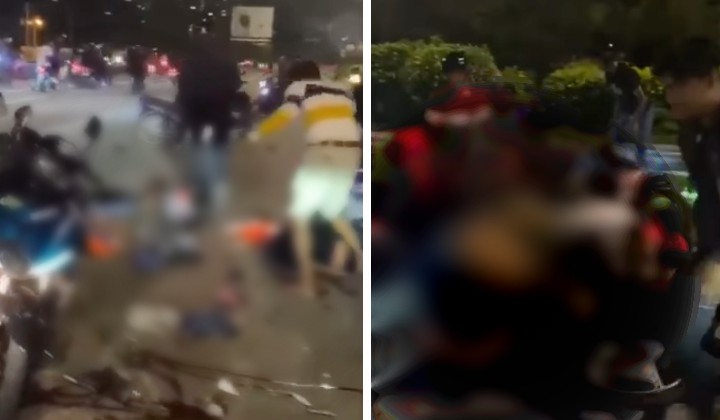 Another Mat Rempit was confirmed dead, bringing the number of deaths to four in an accident involving several vehicles.

The accident happened at about 4 am on the Tun Dr Lim Chong Eu Highway in Georgetown early Sunday morning.

One victim is still in the red zone, and the other two are in the yellow zone.

So far, seven victims have been identified as involved in the accident. Four people were confirmed dead; three victims died at the scene while one died at the Penang Hospital.

He added that all the victims involved in the accident were from Penang and Kedah.

Police Tried To Stop Them

Commenting further, Soffian said the investigation found that several motorcycles were suspected to be involved in illegal racing at 4 am on the route leading to the city centre.

The accident is believed to have occurred after several motorcyclists had lost control and crashed into each other.

The motorcyclists also crashed into two Perodua Myvi and Proton Waja vehicles from behind.

The move is meant as a precautionary measure to prevent illegal racing activities.

He said plans to arrest individuals involved in illegal racing had also been arranged before the incident.

Shahiril Rohaiza Ramli, 46, is the mother of one of the victims.

She said his son, Muhamad Eizreel Muhamad, 25, got married at a young age, had two children aged eight and four and worked as a mechanic at a motorcycle workshop in Bukit Gedung, Bayan Baru.

It is understood that his wife was now pregnant with their third child.

Speaking to the press, she said her son has always been interested in motorcycles.

But he’s a good kid, responsible and cares about the family. I have advised him not to bring a speeding motorcycle. I also know his friends. They are good children and respect their parents.

Mother of one of the victims, Shahiril Rohaiza Ramli, speaking up for her child.

Parents of other victims also spoke up for their children, insisting that the kids have been kind, loving and well-behaved.

Netizens are less sympathetic, saying that the Mat Rempits should have seen it coming.

They added that Mat Rempits are notorious for dangerous actions and disturbing
public peace.

The term ‘Mat Rempit’ did not exist in the Bahasa Malaysia dictionary and was introduced and popularized by Malaysian mass media.

It is said that the word ‘rempit’ possibly originated from the English language, namely
‘ramp it’ which refers to the racers pushing their bikes to the limit on the road.

In the past, the police have proposed that the word Mat Rempit be replaced with the term ‘road bully’.

According to police, the term Mat Rempit can become a pride element to this group that will encourage further illegal activities of similar nature.

He also called on parents to be more responsible in their parenting instead of being in denial.

Rempit and illegal racing usually take place at a specific location. Such hotspots should be identified.

Mapim president Mohd Azmi Abdul Hamid to TRP on how to deal with the rempit menace.

He added that the authorities should also revoke the driver’s license of those involved in illegal racing.