The bodies and three other injured victims were sent to Penang Hospital. 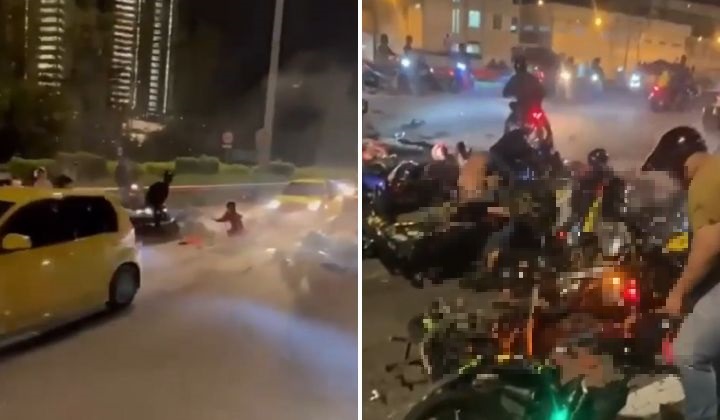 Everyone knows racing is a dangerous thing to do and yet, there are some of us who will still do it despite the dangers.

According to Free Malaysia Today, three other people were seriously injured in the accident.

The bodies and the other injured victims were sent to Hospital Penang.

Based on the videos that were shared online, the three men were racing with a group of ‘Mat Rempits’ on the highway when one of them crashed into a car.

In another video, a pile of motorcycles could be seen on the road. Members of the public could be seen gathered by the roadside after the accident happened too.

Families of victims mourn their loss

Muhammad Eizreel’s mother, Shahiril Rohaiza Ramli, 46, told Harian Metro that people who criticised her son and his friends don’t know how it feels to lose a child.

She shared that her son is married with children aged 4 and 8 years old, and his wife is expecting their third child too.

She said her son is a good man and has always loved motorcycles since he was young. Eizreel, who works as a mechanic, would even build his own motorcycle.

I advised him not to ride his motorcycle too fast. I also know his friends. They were good kids and they respect their elders.

Before getting in the accident, Eizreel dropped by her home at Kampung Tersusun, Sungai Ara, around 6pm but she was at work. The last time they met was during Aidiladha.

The mother of Syazwan Hakim, Mashitah Md Isa, 44, said she didn’t expect to lose another son so quickly. Her third son, Shazril Haikal, 20, also lost his life in a road accident in Kedah last March.

Mashitah added that Syazwan Hakim has a twin brother, Mohd Shazwan Hafiz, who was also involved in the accident.

Mohd Shazwan Hafiz is in a stable condition and is still receiving treatment in Hospital Pulau Pinang.

She shared that Syazwan Hakim is a family man and had bought all his nephews and nieces gifts during the family trip to Cameron Highlands last Tuesday. He was also recently engaged about five months back.

The brother of Ahmad Haikal, Ahmad Najwan Ikhwan Ahmad Nazrul, 20, said his younger brother told his friends to bury him in Balik Pulau near his grandfather’s resting place if he ever passed away.

Ahmad Najwan added that his brother also told him that he had a dream of meeting his friends who had passed away.