Worried members of the public have little confidence that water supply would normalise soon. 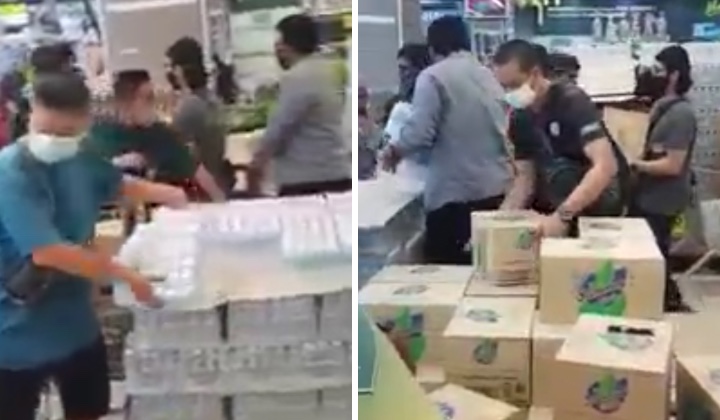 Just imagine turning on your tap, and no water comes out.

The nightmare scenario prompted people in Penang to scramble to buy drinking water.

They fear there would be no water supply due to the floods in Baling, Kedah.

According to images and videos that went viral on social media, grocery stores and shopping malls in the state were being cleared of bottled water.

The panic buys started after the government issued a notice warning against water disruption in Penang due to the closure of the Sungai Dua water treatment plant.

People also took to social media to voice their concerns, with some saying that the panic buys also happened in parts of Kedah.

The plant had to cease operations for four hours following the floods as the raw water from Sungai Muda is too turbid.

The Penang Water Supply Corporation (PBAPP) has taken initial action by draining raw water from the Mengkuang Dam for the use of the people of the state.

Chow explained that the raw water from the Mengkuang Dam could accommodate the use of the people of Penang for 100 days.

The Mengkuang Dam functions as a water storage dam if faced with an unusual situation like now, namely the supply of raw water is disrupted.

The floods in Baling claimed three lives, while more than 1,400 residents had to be evacuated to three temporary evacuation centres (PPS), with seven houses destroyed and about 70 more damaged.

Kedah Menteri Besar Datuk Seri Muhammad Sanusi Md Nor denied allegations that the Musang King durian planting project in Gunung Inas was the cause of floods.

Residents in the surrounding area were reported to have protested a reservoir pool project at the top of Gunung Inas, which was said to have burst.

It resulted in headwaters and mud floods that flowed into Sungai Lata Celak, Kampung Iboi.

The pond is said to have been built by a company involved in the Musang King durian planting project in 2018.

At the same time, Muhammad Sanusi said his party did not want to fall into the ‘ blame game ‘ played by some parties, especially in matters involving tragedies or natural disasters.