Two of the victims’ bodies were found embracing one another under a pile of logs by the rescue team. 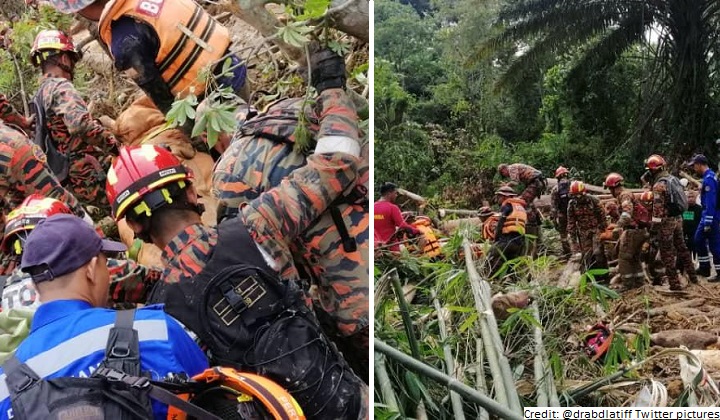 All three bodies of family members that were washed away by strong currents of floodwaters and debris yesterday in Kampung Iboi, Kupang, Baling have been found today, Berita Harian reported.

Two of the victims – Nurul Anis Abu Hassan, 28, who is also four-month pregnant and her mother-in-law, Salmah Mat Akib, 53, who is bedridden after suffering from a stroke – were found embracing each other under a pile of logs by the rescue team.

They were found about 100-meters away from their collapsed house at about 9.30 am this morning.

Kedah Fire and Rescue Department (JBPM) director Senior Assistant Fire Commissioner Sayani Saidon said that both bodies were found without any injuries to their bodies.

“The victims are believed to have drifted before getting stuck on wood and rocks causing them to be trapped under a pile of wood.

“The rescue team saw the victim’s legs and managed to remove the first victim, followed by the second body,” he was quoted by the Malay daily.

Meanwhile, The Vibes reported that Salmah’s son, Mohd Khairul Ikhwan Nor Azman, 14, was found by the fire and rescue department at about 11.55 am today.

According to the report, Nurul Anis, who is pregnant with her first child, had just relocated to her husband’s hometown in Baling as she intended to help takes care of her bedridden mother-in-law.

It is believed that all three victims were washed away by the strong current after their house collapsed yesterday evening.

334 victims from nine villages in Baling had to be evacuated due to the flood.

In a related matter, the Energy and Natural Resources Minister Datuk Seri Takiyuddin Hassan clarified that the headwater phenomenon and flash flood in Baling were not a result of logging activity in the Gunung Inas Forest Reserve area.

This, according to Takiyuddin, was confirmed by the Forestry Department of Peninsular Malaysia (JPSM).

“JPSM has investigated the matter and confirmed that the trees that were washed away are not from logging activities as they are swept along with their roots,” he was quoted by Bernama.

Takiyuddin also added that the incident was a natural disaster.

“… there may be many reasons for it to happen and that is why the ministry is very serious in taking care of biodiversity and the environment,” he said.

A video of Baling flood victims attributing the disaster to the Musang King durian plantation Gunung Inas had since gone viral on social media following the flood.

Meanwhile, an old video of a man announcing ‘the world’s biggest musang king’ plantation in Gunung Inas here had since resurfaced and made its rounds on social media.

However, Kedah Menteri Besar Datuk Seri Muhammad Sanusi Md Nor refused to confirm whether the floods were caused by durian plantations in Gunung Inas, stating that the accumulated rainwater in the Gunung Inas channel is the main cause of the disaster.

“It has not been confirmed (either because of the durian farms). Don’t blame them.

“We need to confirm with scientific evidence, otherwise it is not fair,” he was quoted in another The Vibes report.

“What’s Your Business With The Other Team’s Coach,” Kedah MB Continues To Poke Fun On ‘Someone’ In The Local Football Scene