The event was held at The Dorchester Hotel, one of London’s most iconic 5-star hotels. 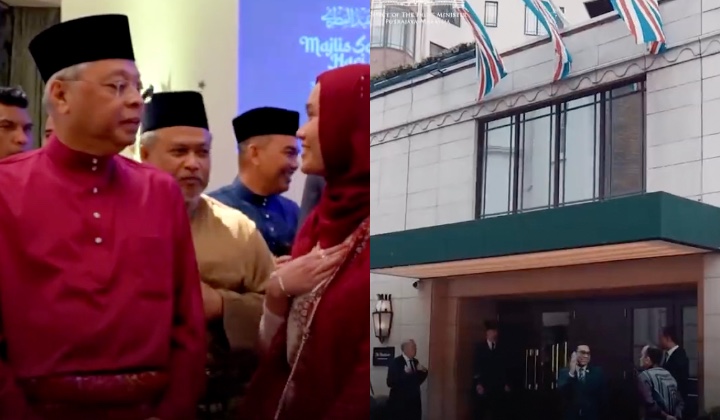 Who does not know Dr Amalina Che Bakri, a doctor from Malaysia who now lives in London, United Kingdom?

The 34-year-old from Kota Baru, Kelantan is known for her outspoken views on a wide range of subjects, especially on women’s rights and dubious medical practices.

READ MORE: Malaysian Dr Amalina Featured On Vogue UK For Pulling Off A Wedding While Battling Pandemic As A Frontliner

In the video, Dr Amalina stated that she was happy to celebrate Raya with ‘Keluarga Malaysia’ and the Prime Minister.

Malaysians in London were indulged at The Dorchester, a five-star luxury hotel.

However, what caught the attention of netizens was when Dr Amalina was considered to be promoting the concept of ‘Malaysian Family’ in the video.

The backlash prompted an apology from Dr Amalina.

Apologies that I have offended some of you. Someone interviewed me to ask me to wish selamat hari raya and my wish for Keluarga Malaysia. Why is this suddenly becoming political? I thought that’s the slogan for the country?

Previously, the concept of ‘Malaysian Family’ has been criticized by many Malaysians because the idea is considered propaganda used on political grounds.

Most netizens on Twitter criticized Dr Amalina’s speech which was considered political and lamented that she is ignorant of the current situation in Malaysia.

Kahkah people truly change and turn their opinion 360. From beria support Amalina, back up her when been bash by FB netizen before this, to yuck yuck her.

Well I too much fak with Keluarga Malaysia, but not really into yucking people easier. We not in the same shoes https://t.co/pFFU3Ne1gJ

Hi Dr Amalina, I am one of ur many followers on IG, not a hater.
It’s just that the word ‘Keluarga Malaysia’ saddens me on every level because after giving birth abroad, I am not welcomed as a part of #KeluargaMalaysia anymore.
Check out #SayaJugaAnakMalaysia #ManaDokumenKami pic.twitter.com/NCqAsTxRSV

I honestly respect Dr Amalina alot but i just have to say this one thing.Attending the function was not wrong but promoting the “Keluarga Malaysia” slogan is,especially when Ismail Sabri has made so many RACIST remarks in the past and now tries to gaslight us with this slogan. https://t.co/99t7mbd1OK

The idea is to work together in recovering the country from the problems and effects of the COVID-19 pandemic.

According to the booklet which contains brief information on ‘Keluarga Malaysia’, the three main thrusts are Inclusivity, Common Ground and Contentment.

Meanwhile, the booklet also shares the vision, goals, strategic direction, message and key areas of focus of the concept.

The vision of ‘Keluarga Malaysia’ is to make Malaysia great again and achieve the status of a developed and high-income country.

Prior to Ismail’s term, past prime ministers and even state leaders also have their own slogans.