Netizens said Farhana should not be flaunting her wealth when many Malaysians are struggling. 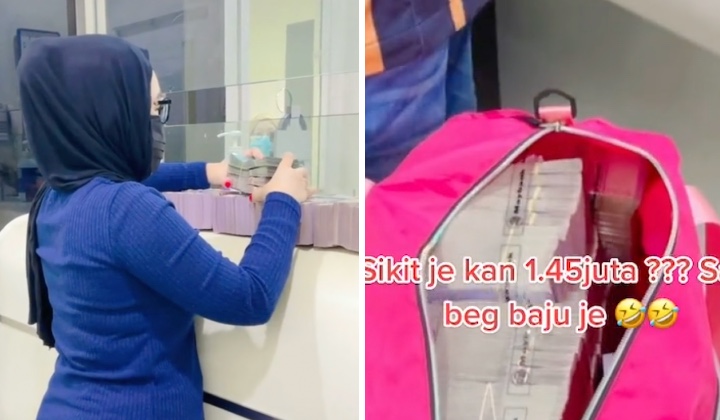 Posting or flexing about wealth can be a fraught move on social media.

A local beauty product entrepreneur drew much attention when she withdrew stacks of cash at the bank.

The businesswoman, Farhana Zahra, claimed that she withdrew RM2 million.

While she was counting it, Farhana thought it would be cool to post a social media update with a video showing the money.

She posted the video on TikTok, which had gone viral.

This is not the first time that Farhana attracted attention by showing her money.

She had also flaunted her money back earlier when she claimed to withdraw RM1.45 million.

If Farhana had wanted attention, she certainly nailed it as the video has more than 1.8 million views.

Despite her flamboyance, Farhana had been known to help the needy.

However, her effort in helping others had also drawn attention for the wrong reason.

In 2020, she wanted to help those affected by the movement control order (PKP).

However, her aid distribution in Kelantan had to be canceled due to the overwhelming crowd, and Farhana had to issue an apology.

What Not To Do Online

Her display of materialism incurred a wave of backlash and negativity from netizens, and it’s not hard to see why there’s resentment.

They feel she should be more sensitive to the differences between her life and those of average people.

Netizens said many Malaysians have barely enough to get by, especially during the pandemic.

Netizens also cautioned that potential thieves could see the information posted online, particularly during the pandemic.

Get Your Crisp New Ringgit Hassle-Free At These ATMs