Sharmine’s father claimed that TNB’s response to the blackout was unsatisfactory. 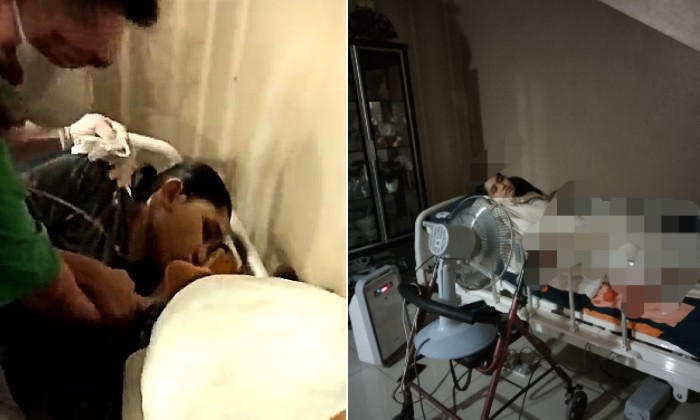 Netizens are chanting #JusticeForSharmine in solidarity with the plight of a 24-year-old youth by the name of Nurul Sharmine Sofea who’s bedridden due to an unidentified neurological disease.

Sharmine’s condition was brought to light by her father, 47-year-old Fahaizal Zee Mohd Jaapar who took on the username “V for Vendetta” on Twitter.

Fahaizal claimed that his daughter’s health had worsened due to a recent power outage that occurred at their home and neighbourhood in Semenyih, Selangor, where Sharmine was bedridden and needed oxygen support to breathe.

Speaking to TRP, Fahaizal alleged that Tenaga Nasional Berhad’s (TNB) response to the blackout was unsatisfactory.

The blackout occurred at 11 pm on 5 January till 2.35 am on the morning of 6 January. Almost three and a half hours. In the first two hours, Sharmine was still okay and stable. In that time I also begged (TNB’s) careline to find out how long the blackout would last, but the carline only promised to get back to me as soon as they can.

The father also claimed that TNB officials had asked why the family didn’t have a battery-operated oxygen machine on standby.

“I said that a battery-powered concentrator machine was expensive and costs tens of thousands,” Fahizal explained in his tweet and told TRP that TNB officials had asked them to get help from Zakat Selangor to purchase the machine.

During the blackout, Sharmine’s condition supposedly took a turn for the worse, and her family tended to her the best they could with the equipment and supplies they had at home.

We received training and support from the neurological and rehab doctors in Cheras, the neuro ward at HKL (Kuala Lumpur Hospital). Sharmine was warded there for four months and from there I learned how to manage if she has a seizure attack. The family camped at the hospital for a month to learn how to manage Sharmines day to day life. Meaning that all family members play their own role.

The father said that Sharmine developed other symptoms that made it difficult to manage her on their own during the blackout.

At close to two in the morning, Sharmine suffered seizures and had to be admitted to the Kajang Hospital where she was intubated and put to sleep for treatment.

She spent a total of eight days in the hospital before being released.

Fahaizal shared a video of Sharmine’s condition after being discharged from the hospital, implying that his daughter was still battling for her life.

She’s conscious now but her condition is weaker than before. When she gets extremely weak she’ll get a seizure attack.

Sharmine’s story was previously highlighted in the news. It’s said that doctors still haven’t found the cause or treatment for her condition.

Because of the unknown disease, Sharmine was forced to abandon her dream of pursuing her studies in computers and cyber security after being bedridden for about a year.

The family also receives aid from the Welfare Department (JKM) and Lembaga Zakat Selangor (LZS) to pay for Sharmine’s needs.