The suspect was said to be arrested by police in Jalan Sepanggar a few hours later. 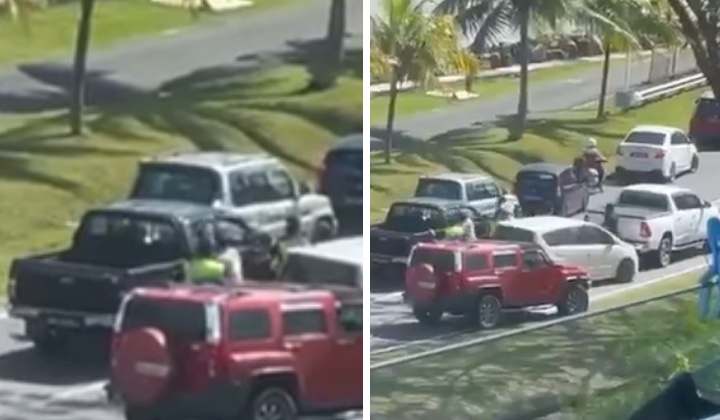 A 4×4 vehicle knocked down a postman while trying to escape from the police at a roadblock.

The incident which happened in Kota Kinabalu had since gone viral on social media.

In a video uploaded by Sukan Star TV on Facebook, the 4×4 vehicle was chased by the police on a congested road.

However, the desperate act of the driver who wanted to escape ended in a postman being knocked down.

While fleeing, the suspect had collided with several vehicles and police were also said to have fired several shots in an attempt to stop the suspect.

It is understood that the incident took place in Jalan Tanjung Lipat.

The real cause of the incident is yet to be ascertained.

Netizens expressed indignance and said the culprit, said to be a woman, should be severely punished.

They suggested that the police be given more liberty to use firearms.

The reason is so that the police can shoot at vehicles used by suspects on the run.

Others pointed out that some of the policemen could have been knocked down as well.

They said the culprit should be given the death penalty as other people could have been killed.

Netizens added that the suspect had since been apprehended.

They also expressed hope that the postman had a minimal injury.

At the time of writing, there has been no official statement from the police regarding the case.