Rohana had been working to get her citizenship issue resolved since she was 12. 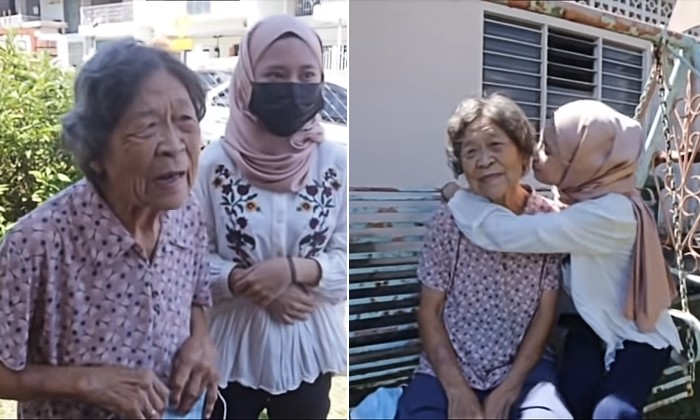 Netizens are sympathizing and taking a stand with the plight of a 22-year-old woman who was denied a normal life when she couldn’t get a hold of her Malaysian citizenship.

A report by Harian Metro brought to light the dilemma faced by Rohana Abdullah, who was forced to drop out of school at the age of 16.

She could not even open a bank account, get married and was denied other fundamental rights for not having proper documentation.

As the story goes, Rohana was born to an Indonesian mother. The mother was a domestic worker at a local kindergarten in Selangor, while Rohana’s father was a Malaysian who had never been a part of her life.

When Rohana was only 2-months-old, her mother had left her to return to her home country.

Since then, Rohana had been cared for by Chee Hoi Lan, a local who was a teacher at the same kindergarten where her mother worked.

Currently 83 years old, Hoi Lan became Rohana’s caregiver in her parents’ stead and raised her like her own child.

Rohana affectionately sees the woman as her own mother and calls her “Laoshi” or teacher.

I love her like my own child. Since she was little, I made sure she ate Halal food and performed her worship as a Muslim to this day… I took on the responsibility as her mother, I thought her, nurtured her. The only thing that separates us is our religion and culture.

Hoi Lan only wishes to see the daughter she raised get married and enjoy a good, successful life before she dies.

Rohana became aware of her citizenship issue when she was 12 and had been waiting around since 2016 after having gone to multiple government agencies to resolve her citizenship status to no avail.

Leaving secondary school at Form 4, Rohana had to continue her studies on her own – taking private tuition and taking her SPM examination as a private candidate.

She shares that she even tries to avoid encounters with police because she has no formal identification.

Read More: These Incredible Malaysians Are On Mission To Save Starving Bajau Laut Communities In Sabah During MCO

Due to her predicament, Rohana had gone through a dark moment where she felt hopeless, riddled with anxiety and even tried to take her own life.

But, she managed to overcome her life’s challenges and is currently employed as a tuition teacher.

Rohana now seeks to attain her citizenship and identity, continue with her studies and only wishes to live a normal life.

Read More: 1.4 Million M’sians Without Identity Cards: Is It Really Due To Ignorance?

Her story caught Malaysia’s attention online and many stepped in to show her support.

Some even brought forward why it was so difficult for “stateless” individuals like Rohana to get her citizenship when Malaysia regularly gives out citizenship to people born overseas like National Team footballer Guilherme de Paula Lucrécio, who’s originally from Brazil.

Remember this guy? Easily get warganegara status but not her. When I said Football is overrated, this is why. https://t.co/AzOU2c3IgU pic.twitter.com/OgvvsyOkqF

Even politicians like former Education Minister and Simpang Renggam Member of Parliament (MP) Maszlee Malik came to weigh in on the issue, saying that no one should be denied the right to education.

Meanwhile, Ketari MP Syefura Othman shared that the problem of youths being forced to drop out of school due to difficulties in attaining their identification cards is actually widespread.

Netizens ask that the government “wake up” and address the statelessness issues in Malaysia.

As a Sabahan, I’ve heard a lot of such stories. Hoping this viral news would wake the government up so they’d do something about it. https://t.co/N2NaIo8TgS

But to leave her without a citizenship and make her stop school because of that, is completely the government’s fault. Gosh this country is messed up. https://t.co/RYdp7sKQlJ