People are debating if Muslims should get involved in liqour-related work even if they do not drink it. 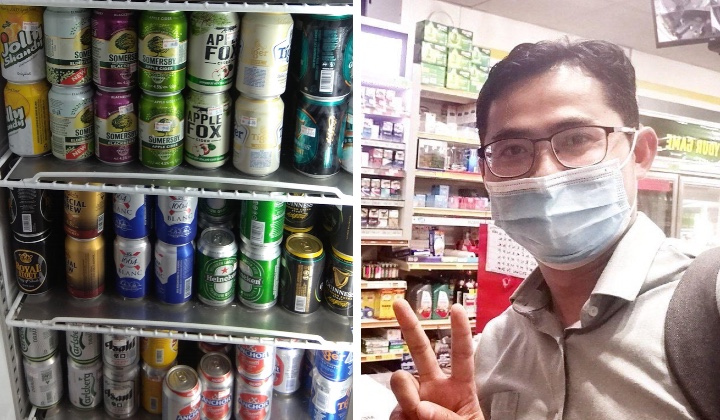 A local activist has stirred intense debate on Muslim employees in Malaysia who are forced to handle liquors in their line of work.

Bilal Jailani, from Malaysian Muslim Solidarity (Isma), narrated how he had intervened several times at convenience stores because Muslim employees had to handle customers buying beer.

He posted his experience on social media, which triggered an avalanche of attention from netizens.

In the posting, he narrated his encounter while queuing to pay at a convenience store in Southville, Bangi.

Bilal said he noticed a foreigner behind him carrying around 6 cans of Tiger beers.

After paying, he asked the cashier, a Muslim, if she can handle the liquor transaction.

Accordingly, the young cashier replied that if she can help it, she doesn’t want to get involved.

Bilal replied by saying that in Selangor, selling alcohol is a Shariah crime punishable by 3 years in prison.

You can’t continue this transaction. If you continue, I will record and make a police report.

Isma activist Bilal Jailani on the Muslim employee having to handle beers.

He also told the foreigner who wanted to buy the alcohol that the cashier cannot continue selling the beers as she is a Muslim.

Then, another staff at the convenience store came to Bilal and said that the employees don’t want to sell alcoholic beverages, but they have no choice as it is part of their work.

Bilal replied that companies cannot order their staff to do something that is against the laws of the country, regardless of the job scope.

He then spoke to the store manager and got him to stop the sale of the 6 cans of beer.

Bilal said he walked away from the convenience store a happy man.

He was glad the Muslim employees listened to him, and he has won them over.

At the time of writing, the Facebook posting by Bilal had more than 11,000 comments and was shared over 12,000 times.

Many netizens applaud Bilal for standing up for his religion.

At the same time, some netizens called for caution given the sensitivity of the issue.

Others feel that Muslim employees need to have faith that they can find a more appropriate job elsewhere.

There are also those who feel that Muslims should be indignant towards cigarettes as well and not just against alcoholic drinks.

Twitter user @hnafrhnaa claimed she used to work at a convenience store and shared her experience in handling such situations.

According to Hadith (record of the traditions or sayings of the Prophet Muhammad), a Muslim is not allowed to be involved in any activity that requires them to prepare, sell, buy, bring, and produce anything that is related to liquor.

Prophet Muhammad said: Allah has cursed intoxicants, its drinker, its server, its seller, its buyer, its presser, the one who demands it to be pressed, its carrier, the one to whom it is conveyed and the one who consumes its price (recorded in Sunan Abi Daud).

Malaysian Consultative Council of Islamic Organisation (MAPIM) president Azmi Abdul Hamid said the issue of liquor sales in convenience and grocery stores has indeed been a matter of debate.

Muslims should not be involved in the sale of alcohol. Management needs to respect this even if the speedmart store gets a license to sell alcohol.

MAPIM president Azmi Abdul Hamid to TRP on the issue

At the same time, he commended Bilal for speaking up in a respectful manner.

Azmi said that reprimanding in a kind way and telling others there are rules to be followed is most necessary.

On another note, Global Human Rights Federation president Shashi Kumar Shanmugam said the law of Malaysia does not stop anyone from serving alcohol regardless of their job description.

Citing an example, the former airline cabin crew said that Malaysia Airlines – in order to achieve and maintain its 5-star rating – is required to serve alcohol such as beer, wine, liquor and champagne especially in its First and Business Class.

I have travelled many times to Dubai and you can see alcohol served in most of the hotels and clubs even though it’s a city in an Islamic country.

Living At Peace With Everyone

Hopefully, the issue can be solved amicably in due course, especially since the sale of alcoholic beverages itself had been contentious.

It’s inevitable that conflicts will arise with disagreements, misunderstandings or simply poor communication.

Many people view conflicts only in a negative way, but it makes us stronger, and we learn what’s actually worth fighting for.

Let’s not let any unwholesome talk come out of our mouths, but only what is helpful for building others up according to their needs.

Our nation’s diversity should be our strength, not a liability.

Let’s give grace and be quick to forgive.