The outlet had only been open for a day. 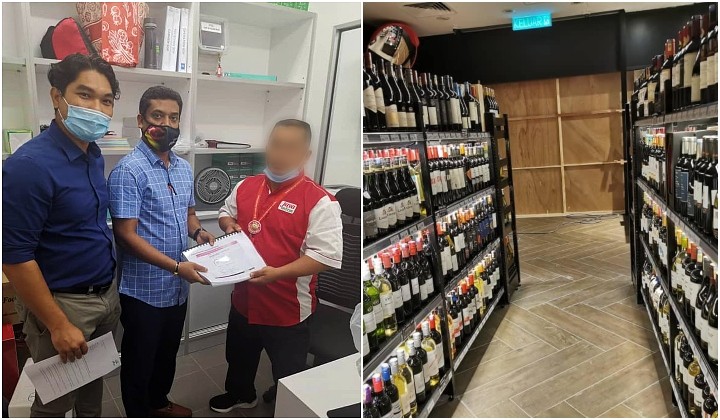 Barely a day after opening the new Jaya Grocer outlet in Puncak Alam, the entrance to its non-halal section was boarded up following protests from a local assemblyman.

Selangor Assemblyman Mohd Shaid Rosli (PEJUANG-Jeram) shared on Facebook yesterday evening that a memorandum had been sent to the management of the Jaya Grocer outlet in Eco Grandeur, Puncak Alam to protest the sale of alcohol in the store.

In the memorandum, the assemblyman stated that the protest against the non-halal section was based on several factors including “respecting the sensitivities of the 90% Muslim population in Puncak Alam” and complaints of “social crimes and fractured family relationships from drinking alcohol.”

He also shared pictures showing the entrance of the non-halal section boarded up, stating that the management had basically agreed to not sell the goods and hoped that they would stick with the decision.

In the post, he also wrote “This is Puncak Alam” and “This is Malay Territory.”

Jaya Grocer had earlier announced the opening of the outlet on 3rd December.

Some of the criticisms included anger at Shaid Rosli for brewing up racial and religious division.

Many also expressed disappointment at Jaya Grocer for caving in to the pressure.

In response to the growing backlash on its social media following the decision to board up the store’s non-halal section, Jaya Grocer acknowledged the concerns and assured it would keep their customers updated via social media.

Dear all, thank you for raising this issue. Rest assured that your concerns have been heard. Please stay tuned and we will keep you updated about any upcoming changes via social media.

TRP has reached out to Jaya Grocer for comment.