Vaneesha writes of how one of her family members who was a Grab driver, witnessed his foreign passenger being harassed by police. 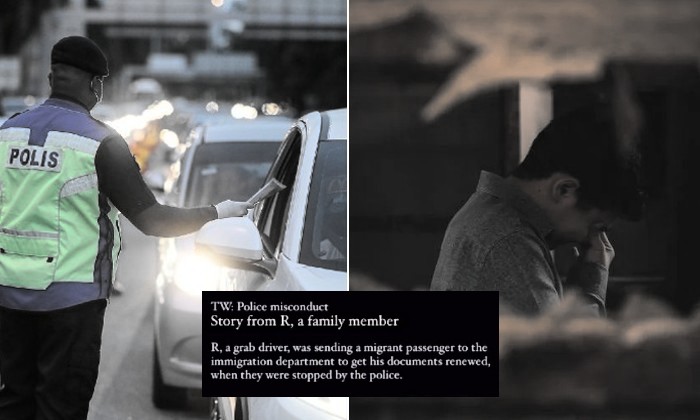 Freelance multimedia producer and journalist Vaneesha Krishnasamy recently took to Twitter to share an alleged case of police misconduct witnessed by one of her family members who work as a Grab driver.

The story was apparently told to her by her mother, and Vaneesha narrates what had happened to the person she anonymously refers to as “R”, who had a foreigner as a passenger on one of his trips.

“R, a Grab driver was sending a migrant passenger to the Immigration Department to get his documents renewed, when they were stopped by police,” wrote Vaneesha stating that the police apparently did not disclose the reason why they were stopped.

“They took R’s license, went to their car, and came back after a while to return the license. Then they told the passenger in the back seat to hand his documents to them and step out of the vehicle.” she continued.

“Frightened, he asked R to accompany him to bear witness to the interrogations he knew he was to face, so they both got down together,” Vaneesha explained before the police officers allegedly misused their power to extort the foreign individual.

They were expecting to have to explain his documentation, to reason, but as soon as the migrant passenger stepped out, the policemen began searching his him all over top to bottom, and placed their hands into his pockets, where they found RM300, money that he was supposed to use to renew his documents. He was told that in order to not be taken into custody, he had to pay a bribe of RM200. With no other choice left, he did so and they returned RM100 to him.

Vaneesha went on to describe how shocked both R and his passenger were following the ordeal and the foreigner’s distress that the money he’d needed to renew his documentation was now gone, and there was nothing he could do but go back home.

Upon entering the vehicle, the passenger broke into tears, both traumatised from the harsh treatment of the police and remorseful over not having enough money to get his documents legalized as he’d planned to.

Veneesha also told of how R tried to console his passenger and said that “let’s just be grateful that they didn’t take you in.”

Why didn’t R do anything?

Veneesha asked that question herself but said that she was told that e-hailing drivers have a history of being allegedly bullied by police.

“They end up marking their car number plate and targeting them,” said Veneesha, adding that others claimed that the authorities would later force them to pay bribes or plant incriminating evidence in their vehicles if they spoke out of line.

It’s an unspoken rule among e-hailing drivers to be extra careful and compliant when stopped. They’re terrified too.

Veneesha also suggests that because R is Indian, the idea of standing up to the police was rather nightmarish.

She continued to share her shattering disappointment of how marginalised groups in Malaysia were not only facing abuse but forced into silence over fears of retaliation.

The humanity we are forced to forgo for the sake of survival. What a choice to make? What a price to pay? If heaven is a place on earth then so is hell, and those of us stuck in this loop, victims of a system, are living in it.

TW: Police misconduct
Today my mum shared a heartbreaking ordeal that a family member (a Grab driver) and his passenger recently faced.. pic.twitter.com/tggStJSgiC

Veneesha has been a very vocal figure in Malaysian when speaking out against disparities faced by Indian Malaysians like herself. Check out what she has to say in this video on social media.