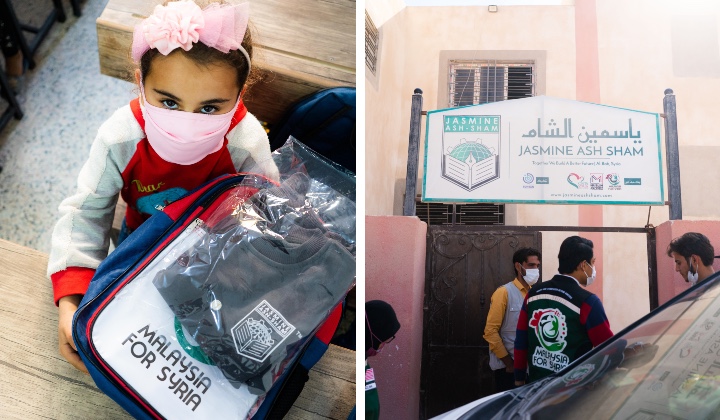 Malaysians may know of conflict happening in Syria, and many of us have even donated money to help the cause. But do you know where you money is going to?

Donations poured in from Malaysians to save Syrian from the creeping effects of a never-ending war that started in 2011.

Over the space of 10 years since the conflict began, it is estimated that Malaysians had donated RM300 million through various non-governmental organisations (NGOs).

The aid is usually food, medicine and tents delivered to internally displaced Syrians who often live in overcrowded tent camps or even out in the open in safe areas.

An example is constructing a small village complete with a mosque and school in Al-Bab, a province controlled by Free Syrian Army in the Idlib region.

Touted as ‘Kampung Malaysia’, the Jasmine Ash-Sham village project is done by Malaysia For Syria in collaboration with other Malaysian NGOs.

NGOs from Turkey and Brunei also took part in the project.

Work had started in June 2020 and cost RM1.5 million upon completion.

The school can accommodate 300 children, while the mosque can house up to 500 worshippers.

A total of 100 homes were also built in the project, which is set amid a barren landscape.

He said the aims is to improve the health and wellbeing of refugees by improving health literacy.

We hope to provide access to healthcare for the refugees, so that they can live full lives and contribute to rebuilding their community.

Syrian refugee Mohamad Nur Damlahi never wanted to leave his home in Aleppo, Syria, but his father was killed in the Syrian civil war which broke out in 2011.

As a result, his mother was so scared all of the time. But Mohammaed Nur wanted to fight on as a mujaheddin (Islamic guerrillas who engage in jihad).

His mother could not bear to lose her son after he took a bullet in the leg, and she prohibited him from joining the fight.

In an attempt to reach safety, the 25-year-old had no choice but to flee from the war with his family in 2014 as the war intensified.

Arriving in southern Turkey near the Syrian border, he worked with NGOs to assist in reconstructing his country in opposition-held areas.

At the time, we had no idea if anyone outside the world would help them. To put things in perspective, the arrival of the Syrian refugees was terrible news for Turkey.

As it is, Turkey is host to the most number of refugees in the world, despite themselves struggling economically.

Yet help comes from a distant neighbour more than 7,000 km away, and one many of them had never heard before.

Speaking to The Rakyat Post, Muhammad Nur expresses his thanks to Malaysians, for helping to provide secure conditions for internally displaced Syrians to live together.

We thank Malaysians for looking into the needs and safety of the Syrian people.

Another Syrian refugee Bayan Sabbagh, who always dreamed of returning to her hometown of Aleppo one day, said Malaysians gave her people hope.

The university student said the efforts by Malayians will go a long way toward restoring peace and tranquility to the region.

She assisted in the humanitarian work by Malaysian NGOs by working as an interpreter and runner for them.

The work enables her to earn some money to support her university education in the Turkish city of Gaziantep, just 97 kilometres north of Aleppo.

From the time the conflict started, Malaysians tried their best to helped us with whatever we needed.

Malaysian Foreign Minister Datuk Saifuddin Abdullah, who espouses the policy of  ‘constructive engagement’ or ‘non-indifference’, commended the generosity of his fellow Malaysians.

I encourage NGOs to be actively involved in global humanitarian relief as part of the humanitarian diplomacy of the Foreign Ministry, in line with the Peaceful Coexistence concept.

He said humanitarian diplomacy is about advocacy, negotiation, communication, formal agreements and other measures in persuading decision-makers and opinion leaders to act, at all times, in the interests of vulnerable people.

The decision to engage in humanitarian diplomacy is not a choice but a responsibility. We alone may lighten their burdens, or render it intolerable. As we choose.

On how long Malaysias must continue to help, Datuk Azam said there is little hope that the situation in Syria will improve any time soon.

He expressed regret that different warring parties continue to face off with one another to this day, between the Syrian regime with its ally Russia and the opposition.

The opposition is backed by Turkey, which has been supporting every aspect of life in the region, from health to education, security to agriculture.

Even with peace, much remains to be done, as frequent bombings and shelling have put most public infrastructure out of service.

The test ahead of the Syrians is an exceptionally difficult one.