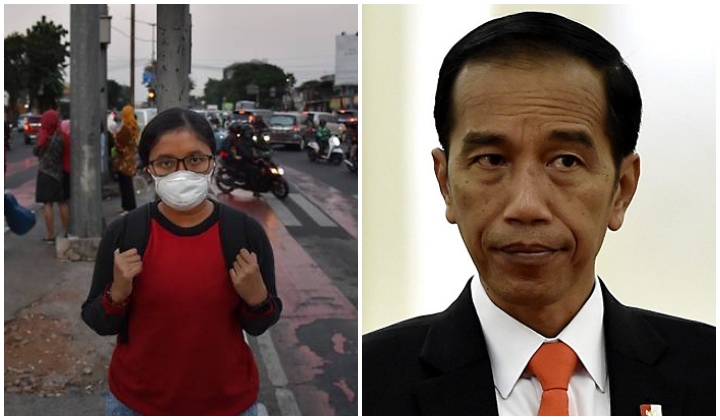 Looks like itâ€™s not only Malaysians who are sick of the haze
that blankets our cities almost every year.

Sick and tired of the coughing, wheezing and stinging eyes,
residents of Jakarta are saying â€œENOUGHâ€ by suing the Indonesian
government for air pollution.

Channel News Asia (CNA) reported that 31 residents of the Indonesian capital are suing President Joko Widodo, the environment and forestry ministry, health ministry, AND Jakarta’s governor over the toxic levels of air pollution in the city.

â€œ(The government) has neglected people’s rights to breathe healthy air.
They have not maintained air quality at a level that is healthy enough for the 10 million people living here.â€

How did they get here?

In 2016, a coalition of environmental groups and the Legal
Aid Foundation began collecting data on the air pollution in the city.

They then spent two years trying to show their findings to various ministries and agencies. But no one did anything.

â€œThey even ignored us when we gave them an ultimatum in December. We threatened them that we will take this to court if they do nothing within 60 days.â€

As you may have guessed, they went ahead and sued them all.

Jakartans started posting images of the smog-covered city with the hashtag #SetorFotoPolusi to illustrate how bad the situation really is.

Jakarta’s sky today, It’s not getting better, it’s get even worse than yesterday 😷😷 #SetorFotoPolusi
from Menara Sentraya 22nd floor, South Jakarta ( 09:20 AM) pic.twitter.com/Xe4tildeJX

Soâ€¦ How bad is the air pollution in Jakarta, really?

The IQAir AirVisual 2018 report showed that Jakarta is Southeast Asiaâ€™s most polluted city with an air quality index of 45.3.

This puts the city in the â€œUnhealthy for Sensitive Groupsâ€ category, which means that general public and sensitive individuals are at risk to experience irritation and respiratory problems.

The measure of pollution in the report focuses on the concentration of harmful microscopic particles known as PM2.5. Due to its small size, PM2.5 can penetrate deep into the human respiratory system and spread to the entire body, causing a wide range of short- and long-term health effects.

Whatâ€™s more concerning though, is that the report finds that Jakarta is at risk of overtaking Chinaâ€™s famously polluted capital, Beijing, where the air quality is actually getting better.

However, the Indonesian Environment and Forestry Ministry told CNA that the Jakarta air quality is at moderate levels based on their data and standards.

Indonesian court will be hearing arguments from both sides
on 1st August, but Ayu Eza Tiara suspects that they will be facing a
long, tough battle in court.

â€œI think the government will try to stall the proceedings by not showing up or ask for more time.
I predict it will take months, or possibly more than a year before a ruling is issued.â€

This news comes hot on the heels of the ongoing conversation on the global climate crisis, where members of the public are starting to take matters into their own hands instead of waiting for governments to implement green restorative policies.